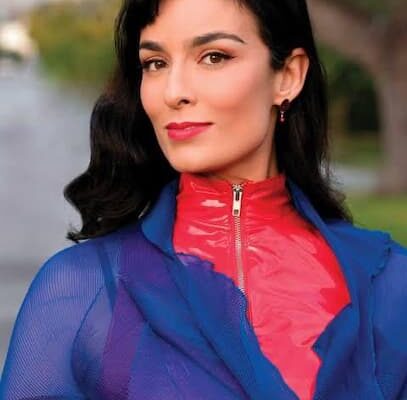 Mariam Saab is a journalist and television host of Lebanese and Australian descent. Saab is an ABC News late-night news anchor. She has previously worked as a reporter for the Daily Star newspaper in Lebanon, where she covered poverty.

She was born on November 8, 1985 in Sydney, New South Wales in a Lebanese-Australian family.

She is a beloved daughter to Majida Abboud-Saab,( mother ) but details about her father are not revealed. Her mother arrived in Australia on the Patris in 1967 and went on to become a well-known Arabic-language broadcast journalist. Abboud-Saab, is a former executive producer of SBS Arabic. She is largely credited with launching the world’s first specialized multicultural public television channel.

Mariam Saab is happily married to musician Rami Khalifé, who is French-Lebanese. They met on a concert tour in Australia in 2009, when she interviewed him for SBS television. Her husband is a pianist and composer who studied at the Julliard School of Music in New York City.

The exact date of the wedding is unknown. She lives in Paris with her husband and family. To balance her professional and personal lives, she divides her time between France, Lebanon, and Australia.

Since 2019, Saab has worked as a late-night anchor for Australia’s flagship ABC News channel. She covered the worst of Australia’s bushfire season in 2019–20. Her art has also been featured on ABC’s digital channels. Saab worked as an English-language news and program presenter for France 24, a global French-government-owned TV channel, from roughly 2014 to 2018.

In addition to that,  she has covered the Paris attacks in November 2015 and the aftermath. She also appeared on France 24’s Arts show, Encore, as a music critic, reporting on music trends from places like Tripoli and Beirut, and interviewing high-profile artists and performers like Australian music star Paul Kelly.

Saab was one of the organizers of the Beirut Music and Art Festival in 2011, which featured 200 local and international musicians, including Sister Sledge, Roger Hodgson, and Earth Wind & Fire as headliners. She worked as a journalist for the Lebanese Daily Star newspaper during his time in the Middle East.

Furthermore, her work included coverage of the country’s persistent poverty, which she documented in policy briefings. During this time, Saab also worked as a freelance producer in Doha, Tunisia, Beirut, and Paris for Al Jazeera English, France 24, SBS TV, and the Australian Broadcasting Corporation (ABC).

Equally important,  Saab started her career as a broadcaster for Alchemy, SBS Radio’s national youth news, current affairs, and music show, in 2004. She  was featured in the Australian edition of Marie Claire in September 2020. She was  alongside a diverse group of high-profile Australians, discussing their hopes and dreams for the Australian nation. They also as well discussed the country’s growing need for change in many areas of its cultural, social, and environmental framework.

Saab appeared alongside her husband and two children in the December 2020 issue of Australian Marie Claire, in a portfolio of intimate moments honoring the COVID-19 epidemic year that was, and engaging in the celebration of family, high fashion, and frills suited for the holiday season.

Her networth accumulates to approximately $800,000 .