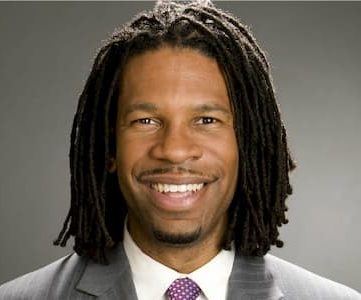 LZ Granderson (birth name; Elzie Lee Granderson) is an American journalist and political analyst. He is the sports and culture columnist for the Los Angeles Times and co-host of ESPN LA 710’s “Mornings With Keyshawn, LZ and Travis.” He is also a columnist for CNN.

He graduated with a bachelor’s degree from Western Michigan University in Kalamazoo, Michigan. He was a fellow at the Institute of Politics at the University of Chicago and the Hechinger Institute on Education and the Media at Columbia University.

There is less public information available about his family or his siblings but he often posts the photo of his mother on his Instagram account.

Happy Mother’s Day to all the mamas, grandmamas, like-a-mamas and especially my mama.

LZ is openly gay although he was married to a woman whose identity is not public. He got married at the age of 21 but they separated after four years and later got divorced.

Granderson has a son known as Isiah Granderson from his first marriage. He graduated from college in 2019. He is a model who has walked on the New York Fashion Week runway.

In May 2019 he wrote a column on CNN titled “Do we owe our children our presence more than presents?”. In the article, he revealed that he had to leave his son when he was 5 years old to find a better paying job.

“For five years, we lived apart as my career took me from Atlanta to New York. We talked on the phone, I visited him as often as I could, and he spent parts of his summer vacations with me. Eventually I got to the point professionally where I could live anywhere in the country, so I moved back, bought a house around the corner from my son, and tried to make up for lost time.”

LZ is openly gay although he was not always open. During an interview with ABC’s Amna Nawaz he said that during his high school and college years he moved through life in the way that was expected of him. In the way that he was seen, as a straight black man. But all the time, he says, he was fighting who he really was.

“I think drowning is a good sort of way to imagine what it’s like and you can see the air, you know. And you can paddle as fast as you can, you know. But you have this albatross around you that’s holding you down. And you just feel like you can’t fully breathe and you can’t be yourself. And that was certainly the case for me.”

He added that the strongest reason for coming out was his son. He also revealed the struggle he faced reconciling his faith with sexuality and about the difficulties he faced professionally as he began a career in sports journalism.

“I was a young buck in the ’90s, you see, trying to break into the business and at that point, it was pretty comfortable to say things like, ‘I’m not sending a gay man into the locker room.’”

In 2016 he was inducted into the National Lesbian and Gay Journalists Association Hall of Fame.

He is married to Steve Huesing since May 2016. Steve is ULTA Beauty’s Merchandising Operations Director and Interim President of Chicago’s Marriage Equality USA.

I’m not easy to be with. I work in some capacity 7 days a week. I travel a lot. I’m up late with my face buried in a monitor in search of the perfect turn of phrase. I snore—loudly (but only on my left side). I don’t do laundry or bad wine. And yet, Steve Huesing loves me anyway. It’s a wonderful feeling to have someone know the real you and stick around anyway. But he doesn’t just stick around, he actively thinks about ways to uplift me. Make me better. He, makes me better. It’s Valentine’s Day and once again I’m away at work, epitomizing why I am not easy to be with. It’s also an example of how blessed I am to have a hubby who only wants me to soar. Which, when I think about it, is probably why we work. After all, he’s the reason why I do.

He is a sports and culture columnist for the Los Angeles Times, where he shares his perspective on how sports connect with politics, culture, race, fashion and music. He also appears regularly on The Times’ Spectrum News 1’s daily news magazine program, “L.A. Times Today.”

He is also the co-host of ESPNLA 710 Radio’s “Mornings with Keyshawn, LZ and Travis,” the ringside reporter for DAZN and a contributor to CNN.

Granderson is co-host of ESPNLA 710 Radio’s Mornings with Keyshawn, LZ and Travis and writes for The Undefeated.  He began his career at ESPN as an editor for ESPN The Magazine. He also co-created, produced and served as host for several other programming initiatives which aired on ESPN3, including LZ’s Café, where he interviewed athletes and celebrities such as Andre 3000, Dale Earnhardt Jr. and Dierks Bentley.

He also served as a columnist for ESPN.com and also as a contributing commentator on Outside The Lines, Around the Horn and SportsCenter. He also served as part of the network’s tennis team covering Wimbledon and the U.S. Open.

In 2006 he broke the Sheryl Swoopes coming out story and reported on the SC Featured piece about Texas basketball center, Imani McGee-Stafford, which won the Lone Star Emmy in 2015. He also co-hosted SportsNation from 2016-2018.

He has also worked for several newspapers, including the Atlanta Journal Constitution, the South Bend Tribune and the Grand Rapids Press, primarily covering sports, politics, education and entertainment.

He serves as an op-ed columnist for CNN.

He has an estimated net worth of $5.5 million.

He responded to Housing and Urban Development Secretary Dr. Ben Carson’s comments during an interview with CNN’s Jake Tapper on National Anthem protests calling his view on NFL players as “bullshit”

LZ Granderson is not having it with Ben Carson. He calls out Carson’s view on NFL players as “bullshit”. Thanks @LZGranderson for calling Carson out. Carson has disgraced himself. Totally pulled his pants down for years now after Gifted Hands. Now Gifted Horror. #BlackLivesMatter pic.twitter.com/a7IYQ5kouO

Saints quarterback Drew Brees is not a racist. A year ago this time, that would’ve been widely viewed as a good thing. Not being a racist just a month ago might have earned you praise, an award even. Hell, Donald Sterling was a racist and he still got an award, from the Los Angeles chapter of the NAACP, no less. But in the aftermath of George Floyd’s killing, the masses are beginning to recognize what identifying as “not racist” really is— complicity. If non-racist were a beer, each sip would have all the flavor of white privilege with a lot of empty calories and a bitter, shameful aftertaste. This country isn’t trying to atone for the original sin of slavery because it’s being overrun by racists yelling slurs in the streets. No, we’re here in large part because of the surplus of non-racist white people. Those well-meaning individuals who personally would never discriminate against someone of a different race but would vote for someone who does for the right tax cut. The person who watched Floyd’s life slip away on video, then penned a vague statement about “diversity” and “inclusion,” maybe even threw in a quotation from Martin Luther King Jr. The person so committed to not being racist they can’t bring themselves to say the word “race” or “racism.” The person you ask about protesting police brutality who lectures you about looting. Or the flag. —passages from my latest for @latimes