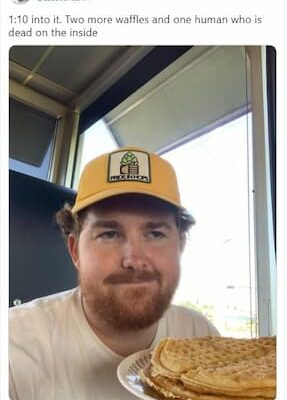 Lee Sanderlin is an investigative and political reporter for Clarion Ledger covering the state of Mississippi. He went viral on Twitter on June 17, 2021 after he was forced to spend 24 hours in a Waffle House after losing in a fantasy football league.

He has a Bachelor of Science degree in Journalism from Appalachian State University and is an investigative fellow with the Toni Stabile Center for Investigative Journalism.

Lee is a state government and investigative reporter for The Clarion-Ledger. He previously served as a Metro reporter. He began his career as a general assignment reporter for Watauga Democrat and later joined The High Point Enterprise as an education, courts and crime reporter and also as a digital manager.

On June 17, 2021 Lee revealed on his Twitter account that he was to spend 24 hrs in a Waffle House after he finished last in a fantasy football league. He said that as a punishment every waffle he ate shaved an hour off the clock.

I am coming to you live from a Brandon, Mississippi Waffle House. I, a total loser, came in last place in my fantasy football league. As punishment, I spend 24 hours in a Waffle House. Every waffle I eat shaves an hour off the clock. It’s 4:07 Central. pic.twitter.com/oRugzU7rQT