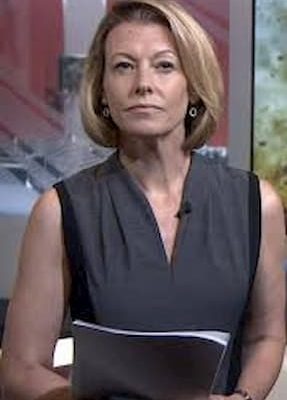 Laura Kate Trevelyan  is an American media personality working as a  BBC anchor/correspondent based in New York .She previously worked as the United Nations correspondent for the BBC and was also a general reporter for London Newspaper Group as well as  a researcher for Channel 4’s  A Week In Politics.

Laura was born on 21 August 1968 in Islington, London, United Kingdom.

Trevelyan attended  Parliament Hill School in North London and later joined Bristol University where she   graduated with a first class degree in Politics . She also  gained a postgraduate diploma in Journalism from the Cardiff School of Journalism in 1991.

Laura is the daughter of George Macaulay. Her parents divorced when she was a little girl. Trevelyan decided to trace her family history after she was constantly quizzed about her famous family, who lived in the magnificent mansion Wallington, in Northumberland thereby writing a book about the famous family secret. In the book, she gives details of her father

“My father, named George Macaulay after his grandfather, was quietly furious about his giveaway initials. As a history student at Oxford, his tutors were always on the lookout for a glimpse of the family genius, wanting to enter him for essay competitions. So unsurprisingly, Dad didn’t try to pass on the family history to us lot”.
Laura’s grandfather is Humphry Trevelyan, son of GM Trevelyan, who was recruited to work at Bletchley Park during the Second World War translating German secret code.

She was brought up alongside her two siblings whose names hasn’t been revealed.

Laura is married to James Goldston  a British-American journalist, media executive, and current President of ABC News. He studied philosophy, politics and economics at Jesus College, Oxford and also attended the Cardiff School of Journalism where he was trained by academics including British newspaper editor Sir David English, graduating in 1991 with a PgDip Journalism qualification.

Trevelyan and her husband  has three sons whose identity hasn’t been revealed.

Laura joined  the BBC in 1993, initially taking roles as a researcher for Breakfast News and as an assistant producer for Newsnight before becoming a reporter for On the Record in 1994. Here,  she covered the IRA ceasefire and Northern Ireland peace process. In 1998, Trevelyan shifted her focus to political reporting, covering Westminster, the 2001 general election and the run-up to the invasion of Iraq. She was a political correspondent for BBC News from 1999 and was based in London until her move to the US in 2004 to cover the presidential election.

From 2006 to 2009 Trevelyan covered the United Nations, travelling to Darfur, Congo, Burma and Sri Lanka and was the first journalist to interview Secretary General Ban Ki-moon. From 2009 to 2012 Trevelyan was a BBC correspondent based in New York, covering everything from the row over the proposed mosque at ground zero to Haiti’s cholera epidemic.

Prior to working for BBC, Trevelyan was a general reporter for London Newspaper Group   before joining Channel 4 as a researcher on A Week In Politics in 1992.

Outside journalism, Laura is an author. She has written the book A Very British Family: The Trevelyans and Their World, published in 2006, on the history of the Trevelyan family including Sir Charles Trevelyan, 1st Baronet, of whom she is a descendant. Her second book, The Winchester: The Gun That Built An American Dynasty, explores the family behind America’s most famous firearm and was released in September 2016.

She has an estimated net worth of $1 million