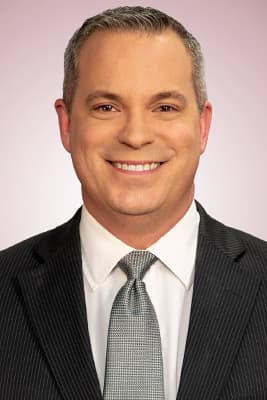 Kyle Jordan is the co-anchor at The News at Daybreak and also co-hosts Morning Break with Cyreia Sandlin and Tim Guidera at WTOC in December 2020.

His age is still unknown.

Kyle grew up in Thomasville, Georgia, and attended the University of Georgia to study Broadcast Journalism. He also holds a history degree from Birmingham, Alabama’s Samford University.

Nothing is yet known about his parents as he has not revealed it to the public.

He is happily married to his wife Whitney Jordan. They have settled in Richmond Hill.

He is a loving father of one, a son named Wyatt.

Jordan is the morning anchor at WTOC News. He celebrated 20 years as a broadcast news journalist in June 2021. His cross-country career began as a reporter and sports anchor at KDRV in Medford, Oregon. When he moved to WINK in Fort Myers, Florida, he began anchoring the weekend morning show, which resulted in a major scheduling shift.  Kyle moved to Charleston, South Carolina, in October 2012, from the Gulf Coast to the Atlantic.

Additionally, he was the host of WCSC’s top-rated morning newscast for eight years, winning an Emmy for Best Morning Newscast in 2021. Kyle has reported from the path of storms over multiple hurricane seasons, including wildfires in the West, the terrible oil spill in the Gulf of Mexico, and the awful Charleston church shooting. His true calling in journalism has always been to find “Good News” about the people in his neighborhood. Kyle is a great sports fan who is looking forward to returning to Georgia and being closer to some of his favorite teams.