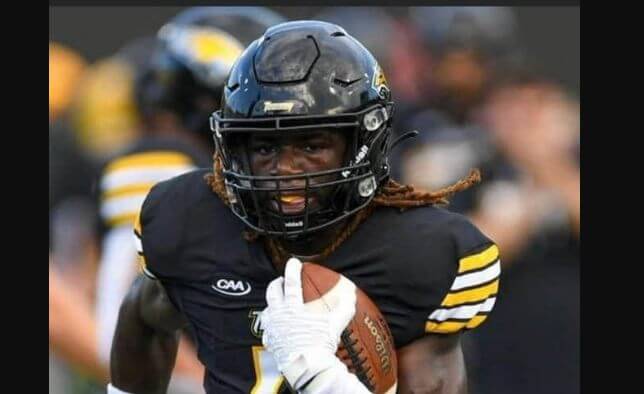 Kobe Young, a graduating senior of The Towson Tigers football team is being reported to have passed away over the weekend as per a statement by Coach Rob Ambrose on Monday, March 14.

Kobe Young’s hometown is in Winston-Salem, N.C, and played as a Running Back. He was a student at Parkland H.S and played for head coach Martin Samek at the School. He went on to earn All-Northwest honors from the Winston-Salem Journal as a junior.’

He was the son of Kevin Farrel and LaTonya Young. He had two brothers, Torez and Charles as well as two sisters, Paige and Christy.

According to his biography, he was majoring in health care management at Towson University, a public university in Towson, Maryland.

Coach Ambrose of the Towson Tigers described him as a rare and special soul whose presence always lit up the dressing room. His most productive years were in 2018 where he played 12 games at running back and kick return. He manages 72 carries, 455 rushing yards, and three touchdowns as per his bio. He also added 10 catches for 54 yards and a score plus five kickoff returns and 76 yards.

In the 2019 season, he appeared in three games as a running back, redshirt season. In those games, he got 29 running yards and 51 receiving yards. He also scored a lone touchdown of the season which marked the win at Maine by 9/14.

Kobe Young’s death was announced on Monday, March 14 that he had passed away over the weekend. His cause of death is suicide after a mental breakdown as per close friends. Confirming his death, his close friend Kyijha Barrett wrote that he had no words to express how she felt on the passing of Kobe. She described him as one of the sweetest people who lit up every room with his contagious smile. “He always lifted the people around him,” Barrett wrote.

“I am so grateful that I was able to meet someone like you, God I thank you!” Barret went on to say that she was so sorry Kobe had taken his own life and that she loved him with her entire heart. ” I swear I’ll never forget you! thank you for everything thank you for always making me smile it was never hard for you to do it, Tay Kobe Young.”

Deviante Bentley wrote in a tribute that Everybody should not downplay the issue of mental health in men. “Worse feeling in the world is when you take that pain and put it aside only to realize you’ve created a darker space impossible to escape from.”  He concluded his statement by writing, ” The worst mistake we make in life is thinking we have time. Tell em you love them while they here because the devil is working overtime.”

Read about Craig Renaud, Brent Renaud’s Brother. Brent is an American Journalist who was shot dead by the Russian military in the Kyiv suburbs.