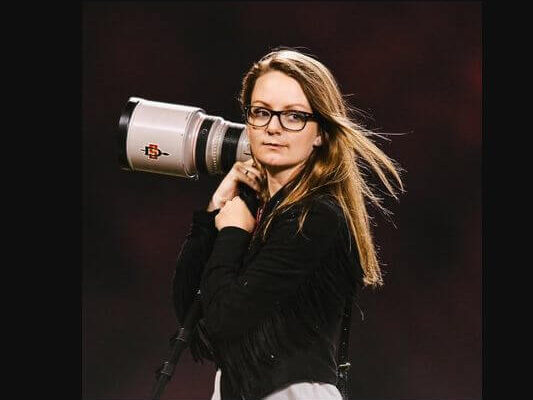 Kelly Smiley an award-winning NFL Photographer and Photo Editor for the NHL’s Los Angeles Kings is in the headlines after she fell from a stage during a Los Angeles Rams Super Bowl celebration on Wednesday morning Feb 16.  She says she broke her spine and her two cameras were damaged.

Kelly Smiley says on her Linkedin that she went to the San Diego State University from 2013 – to 2018. She has been working as the Photo Editor for National Football League (NFL) from Aug 2019 and as a Freelance Photographer for the Los Angeles Rams from Aug 2021.

Kelly has also been working as a part-time Photo Editor Anaheim Ducks from Oct 2021 – Present and for the Andrew D. Bernstein Associates Photography, Inc partly working as a photographer and Digital Imaging Technician covering the NBA, NHL, Staples Center, and Microsoft Theater.

Smiley was seen in a video that went viral across social media falling backward as she was trying to take a photo of Rams quarterback Matthew Stafford. In the video, Stafford can be seen walking away from the commotion while his wife, Kelly Stafford, came over to check on Smiley.

Smiley gave an update on her health on social media handles writing in a Tweet, “That’s me. Waiting at the ER for X-ray results. Both my cameras broke but I’m ok,” she initially wrote. Three hours later, she provided an update: “Unfortunately I fractured my spine.”

That’s me 😰. Waiting at the ER for X-ray results. Both my cameras broke but I’m ok https://t.co/TAjyicvn7L

A GoFundMe page has been created by her friends, Tim and Kelly with an aim of helping to cover Kelly’s medical expenses as well as replace the camera gear that was severely damaged following the fall.  The two wrote in the crowdfunding page, “This morning (2/16/2022), while covering the Rams parade in Los Angeles, Kelly took a heavy fall off the stage while covering the event, and it landed her in the hospital with a fractured spine.”

They conclude their appeal by stating that Kely is loved by all who know her and is a well-respected individual in the photography community. “Please consider donating to this gofundme to help Kelly hit the ground running after she heals up.”

Things took a turn for her after racist and homophobic tweets were discovered from her Twitter account prompting her to delete her social media accounts.

It turns out that @kellysmiley23 (she deleted her account) the female photographer that fell at the #Rams Championship Rally is a racist and a homophobe. But #MatthewStafford is the “bad guy”? 🤷🏻‍♂️ #KellySmiley #Racist pic.twitter.com/nClvqtrZ5Q

Rams’ QB Matthew and Kelly Stafford announced they will be covering the medical expenses for Kelly Smiley, “We have been in communication with Kelly Smiley … and we are sorry for what happened.”

as happy as can be pic.twitter.com/XT0Hy4aR6S