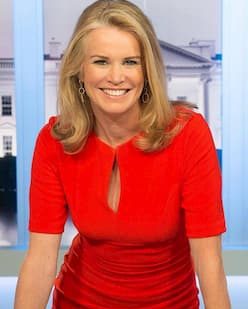 Katherine “Katty” B. Kay is a British award-winning media personality who has worked for BBC Network most of her career. She is a senior editor and executive producer for OZY Media. She previously hosted BBC World News America with Christian Fraser. Katty is a frequent commentator and guest host on MSNBC’s Morning Joe and guest commentator on NBC’s Meet the Press.

Kay was born on 14 November 1964  in Wallingford, Berkshire, England.

She stands at a height of 5 feet 9 inches.

Katty attended the Oxford University and graduated with a Bachelors’s Degree in French and Italian Literature.

Kay was born in Wallingford and grew up in Blewbury.  She spent time in various Middle Eastern countries where her father was posted as a British diplomat. Her mum,  Shirley Kay, was a journalist. During an interview, Kay referred to her mum as a hardworker ,” My best teacher was my mother. She was a diplomat’s wife living in the Arab world in the ’70s and ’80s who always worked, even in really tough circumstances. She would drive off into the desert and live with the Bedouin for a week and write books and interview men who told her she was the first woman to set foot inside their office.  However, her mum died on 22nd November 2020. Kay posted a photo with her parents on her twitter page with a caption “,She was curious and generous to the end. In this difficult time we were fortunate that she died at home, holding hands with her husband of 64 years. We took this photo a week ago in her garden in Cyprus. I was lucky to have her.”

Katy was brought up alongside her  two brothers and a sister. One brother lives  in Hong Kong, another in Nairobi, and her sister lives  in Qatar. Details about their names is unavailable.

Kay is married to Thomas Richard “Tom” Carver,  the Head of Global Communications, Carnegie Endowment for International Peace. He is also a writer and former BBC foreign correspondent and graduated from University of Bristol. He is the step-grandson of Bernard Montgomery, 1st Viscount Montgomery of Alamein.. His grandfather Oswald Carver was an Olympic oarsman who rowed in the 1908 Summer Olympics in London. He was killed during the battle of Gallipoli in 1916 aged 28. His grandmother, Elizabeth Carver married Bernard Montgomery in 1927. Montgomery would go on to become Field Marshal Montgomery in World War II. Carver was 15 when Viscount Montgomery died, and formed part of the guard of honor at his funeral at St. George’s Chapel, Windsor Castle as part of his school cadet force.

Kay was diagnosed with bronchitis in early 2017, She wrote an article explaining how she felt guilty about being sick. “Getting out of bed to refill my water glass takes more physical effort than I usually exert in a week. My bed has disappeared under a pile of disgusting used tissues. I look, feel and sound revolting. I am revolting. My doctor says I have bronchitis, or flu and bronchitis, or flu and an infection. That sounds mild compared to what I feel. And I confess I was hoping for a more spectacular diagnosis, if only to relieve my guilt. I should be at work this week. Tillerson is being grilled. Obama is tearful. Strange sexual allegations are trending.” read part of the article.

Kay joined the BBC in 1990 as Zimbabwe correspondent for the African section of the BBC World Service. She then returned to London to work for BBC World Service radio, before being posted to Tokyo for BBC News television in 1992 and then Washington, D.C., in 1996. Soon afterwards, she joined The Times news bureau, but returned to the BBC as a freelance journalist in 2002, based in the United States.

Katty has covered sex scandals in the Clinton administration, three Presidential elections as well as wars in Kosovo, Afghanistan and Iraq. She was at the Pentagon just 20 minutes after a hijacked plane flew into the building on 11 September 2001 – one of her most vivid journalistic memories is of interviewing soldiers still visibly shaking from the attack.

Prior to working for BBC, Kay also makes frequent appearances as a guest panelist on The Chris Matthews Show, Morning Joe and Meet the Press on NBC, Real Time with Bill Maher on HBO, and in the past also appeared on Larry King Live on CNN. She occasionally substituted for Diane Rehm on The Diane Rehm Show on NPR.

In late June 2021, Katty joined OZY Media as a senior editor and executive producer. She is expected to host a new line-up of streaming shows expected to be announced in summer and launch in fall, starting with a US and global politics interview show.

“I’m excited to bring my experience to OZY, but also to try a lot of fun, new things and, importantly, to learn. This next chapter is all about how I can contribute to the conversation in new and meaningful ways.” Katty said.

A post shared by My Friends Are Fiction ?? (@myfriendsarefiction)