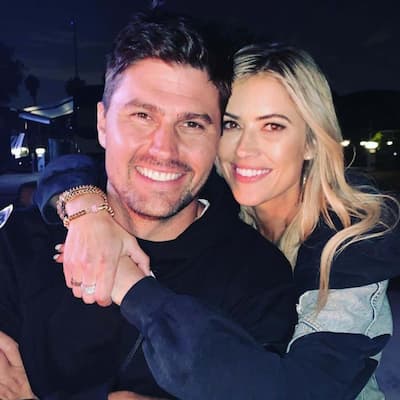 Joshua Hall is a licensed realtor based in Texas working for Spyglass Realty and a former police officer. He is the fiance of real estate and design expert Christina Haack.

Joshua stands at a height of 6 feet tall.

He belongs to white caucasian ethnicity.

Joshua is the son of Venita Hailand Decastro but the name of his father is unknown. His father howeverserved in the military which prompted the family to move around the country for various military assignments.

Hall has two younger sisters; Jessica Hall and Stacie Adams (nee Stacie Hall). Jessica Hall is a former Playboy model and a television personality. She hosted MTV reality series Burned. She also made regular appearances on Kendra and Kendra on Top. She also appeared on four episodes of The Hills alongside her sister and was one of the briefcase models on Deal or No Deal in 2005. She is one of the host of a podcast called Flashbacks.

Stacie Adams is also a television personality having appeared on The Hills, as “Stacie the Bartender” — the object of Spencer Pratt’s flirtations, despite his being in a relationship with his now-wife Heidi Montag.

Joshua was previously married to Chelsea. According to his sister’s Instagram the couple got married in August 2016. It is not clear when the couple divorced.

Hall was a police officer. He became a police officer at the age of 21 and served for 16 years before his career was cut short due to injuries sustained in the line of duty ultimately leading to early retirement. He says he took pride in helping people with everyday difficulties and putting them at ease.

According to his realtor page, he wrote that his policing his career helped him on his path to becoming a realtor: “With my previous career solving problems, helping others through difficult situations and my love for real estate, I made the decision to get my Texas real estate license.”

Joshua is a licensed realtor based in the Greater Austin and surrounding Hill Country area. He works for Spyglass Realty. After retiring from being a police officer, he decided to get Texas real estate license.

“I wanted to continue to share all the good things that make Austin so special to those considering purchasing a home here. Over the last two years, I have been partnered with some of the top agents in Austin, have obtained a great amount of experience and expertise buying/selling real estate. When I’m not helping clients find their dream home or negotiating a deal, I am always taking in all that Austin has to offer.”

Joshua is in a relationship with Christina Haack. The couple got engaged on September 20, 2021. Christina revealed the news on her Instagram. The news of their engagement came two months after PEOPLE exclusively confirmed in early July that the couple were in a relationship.

Christina later revealed in a post that they had been dating for months. “When we met this past spring, the synchronicities hit us so hard and fast they were impossible to ignore. I felt immediately crazy protective over him and wanted to keep him for myself and get to know each other before the tornado (media attention) hit. We’ve had a few solid months of just us getting to know each other and I’ve loved every second of it.”

Christina Haack is a real estate and design expert and television personality. She co-stars on HGTV’s show Flip or Flop alongside her ex-husband Tarek El Moussa and her own HGTV show Christina on the Coast. She has previously been married twice. Her first marriage was to Tarek El Moussa (2009 – 2017). They have two children together Taylor and Brayden. Her second marriage was to Ant Anstead (2018 – 2020). They have a son together known as Hudson London Anstead.

Joshua has no kids.

His net worth is estimated to be between $2 – $3 million.