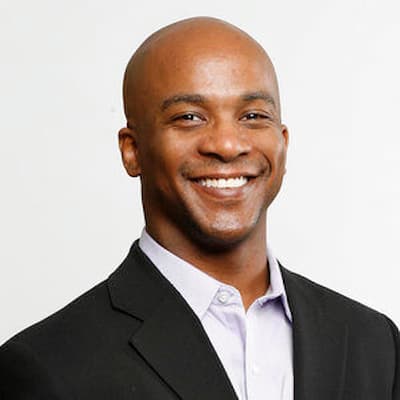 Jonathan V. Fortt is an American media personality serving as the co-anchor of CNBC’s Squawk Alley broadcast which airs from the New York Stock Exchange. He previously served as a senior editor at Business 2.0magazine where he produced the “What Works” section and also worked for Fortune Magazine as a senior writer.

Jon attended Montgomery Blair High School, where as president of the Student Government Association in the 1993-94 school year he was among the students who organized protests for a new school in its current location, then known as the Kay tract. In his senior year, he won the Knight-Ridder Minority Journalism Scholarship. He attended DePauw University, where he was part of the Media Fellows honors program. There he worked at The DePauw student newspaper and became editor. He graduated with a Bachelor of Arts in English Writing.

Jon is the son of John Fortt and Annette Fortt. His father is an architect-turned-United Church of Christ minister, while his mother is a Pratt Institute-trained artist and teacher. He hasn’t revealed much about his parents but he said that his parents were both graduates.

“But my parents were both graduate-school educated, so education was always very important. Family was important, too. We spent a decent amount of time at church every Sunday, seeing my dad in the pulpit and hearing his messages.

He was brought up alongside his two brothers, Tavia and Steven but not much is known about them.

Jon and his wife have two sons together, Nathan and Benjamin.

Fortt currently co-anchors CNBC’s “Squawk Alley” (M-F, 11 AM-12 PM ET) broadcast live from the New York Stock Exchange. Previously, he was an on-air editor based at CNBC’s global headquarters in Englewood Cliffs, N.J. He joined CNBC as a technology correspondent in July 2010, working from CNBC’s Silicon Valley bureau where he covered the companies, start-ups and trends that are driving innovation in the industry. He also contributes to CNBC.com.

Prior to joining CNBC, Jon previously worked for Fortune magazine, where as a senior writer he covered both large technology companies— such as Cisco, Hewlett-Packard, and Microsoft—and trends, including cloud computing and the smartphone revolution. He was also a senior editor at Business 2.0magazine where he produced the “What Works” section. From 1999 to 2006, Fortt wrote and edited at the San Jose Mercury News, Silicon Valley’s hometown newspaper. There he contributed to several efforts that won awards from the Society of American Business Editors and Writers.

As a personal technology writer, his coverage duties included Apple, Palm and Adobe. He also served in roles outside the business department, covering education, editing local news and developing technology strategy. As the newspaper’s senior Web editor, he helped develop a blog and podcast network, managed the creation of multimedia projects and served on the board of the Associated Press Managing Editors.