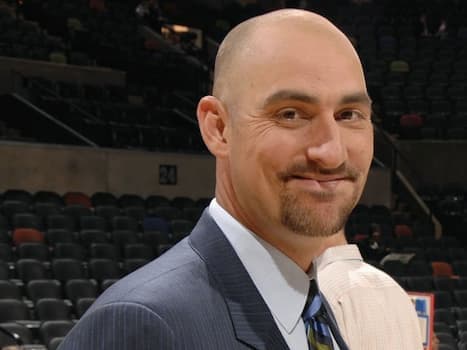 He stands at a height of 6 feet 7 inches tall.

Jon attended De La Salle High School in Concord, California, where he played basketball. After that, he spent a year at the University of the Pacific and a year at Paris Junior College before getting a basketball scholarship to Georgia Tech in Atlanta, Georgia.

Barry is the beloved son of Hall of Fame Rick Barry ( father) and Pam Connolly (mother).

He has three brothers who are all basketball players: Scooter Barry, Brent Barry, and Drew Barry. He also has two sisters Canyon Barry and Shannon Barry.

He is a married man. However, he has not disclosed the identity of the one he is married to.

He is a loving father of one, a son, Tyler Barry.

Barry, a 14-year NBA veteran, joined ESPN as a studio and game commentator prior to the 2006-07 NBA season. He is currently the lead game analyst for NBA broadcasts on ESPN Radio. Throughout the NBA season, he also serves as an analyst for ESPN game telecasts and gives insight for a number of ESPN news and information studio shows.

However, Barry had a slow start to his career as a backup player. He had opportunities to contribute to some good teams’ playoff runs. He scored 739 points in 82 appearances with the 2001–2002 Central Division champion Detroit Pistons and 326 career playoff points in 63 NBA playoff games over 14 seasons.  The Boston Celtics selected him after college, in the first round of the 1992 NBA draft, but he refused to sign a contract and sat out the entire season.

Additionally, midway through the season, the Celtics traded his rights to the Milwaukee Bucks for Alaa Abdelnaby. Jon’s first three years in the NBA were spent with the Milwaukee Bucks. They finished last, tied for last, and second to last in their division. Jon has also played for the Atlanta Hawks, Los Angeles Lakers, Golden State Warriors, Sacramento Kings, Denver Nuggets, and most recently the Houston Rockets, in addition to the Milwaukee Bucks and Detroit Pistons.

Along with that, in the crucial game 5 of the Detroit Pistons’ series against the Toronto Raptors in the first round of the 2002 NBA playoffs, Barry scored 12 first-half points in a 3-minute stretch. After the 2002–03 season, Barry was released by the Pistons, then on March 1, 2006, he was released by the Rockets, ending his NBA career.

His networth has amassed to approximately $ 1.5 million