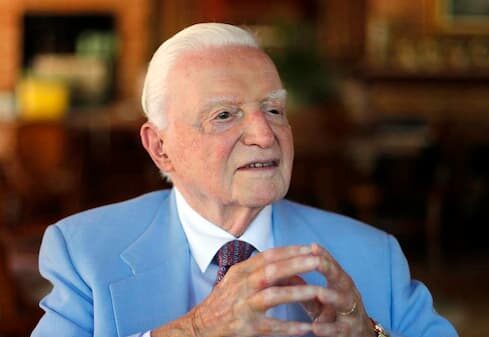 John James Rigas was an American businessman and founder of Adelphia Communications and former Buffalo Sabres. He died on September 30, 2021. He was diagnosed with bladder cancer in 2015.

John is the son of Greek immigrants James and Eleni Brazas Rigas.

Rigas was married to Doris Nielsen Rigas until she died in 2014 at the age of 63. At the time of her death, Rigas was in prison and was not allowed to attend her funeral.

After graduating from High School in 1943 he joined the army and was placed in the 14th armored infantry division seeing combat in France. His division ended up being involved in the liberation of Dachau concentration camp in April of 1945. After the war ended he enrolled at Rensselaer Polytechnic Institute in Troy, New York.

After graduating from Rensselaer Polytechnic Institute he worked in a Sylvania electronics components plant in Emporium, Pa. He however got an entrepreneurial itch and bought a movie theater in Coudersport. He made little money from the theatre but it gave him the opportunity to enter a new business when one of his movie distributors suggested that he look into buying into the local cable outlet. He became a partner in the town’s cable TV franchise in 1952, but to do so, Mr. Rigas and his brother, Gus, borrowed heavily.

Taking on more debt to expand the company became a practice that Mr. Rigas embraced throughout his career. He acquired small suburban cable systems around the country, particularly in South Florida, Western New York and Pennsylvania.

Rigas founded Adelphia in 1952. Adelphia was once one of the largest cable providers in the United State, providing service to more than 5 million customers in 30 states. The cable giant was sold to Comcast and Time Warner in 2006. He stepped down as the CEO in 2002 after he was indicted for bank fraud, wire fraud, and securities fraud.

In 2004, Rigas was his son Timothy, Adelphia’s chief financial officer, were convicted of securities fraud and bank fraud for falsifying Adelphia’s earnings and diverting more than $3 billion in company funds for their own use. Another son, Michael, pleaded guilty to a lesser charge.

In 2002, prosecutors asserted that had concealed nearly $2.3 billion in company debt from stockholders while portraying the company as having sound finances even though it was dangerously overextended.

That spring Adelphia revealed that the Rigas family had “co-borrowed” $2.3 billion with the company over several years. The money, it turned out, had been made available for the family’s personal use.

Adelphia’s longtime accounting firm, Deloitte & Touche, refused to sign the company’s annual report to the Securities and Exchange Commission, Adelphia’s already plummeting shares were delisted. The company later filed for bankruptcy and was eventually divided up and acquired by Comcast and Time Warner.

Rigas was sentenced to 15 years in federal prison and Timothy to 20 years. Their sentences were later reduced by three years. Rigas was released in 2016 after he was granted compassionate release. Timothy Rigas was released from prison in July 2019 after serving 12 years.

Rigas had been offered a reduced sentence in exchange for a guilty plea but he refused maintaining his innocence. During an interview with USA Today he said; “I believe there is a time when you can’t compromise your values. My legacy is to my grandchildren, and you have to stand up — as difficult as it is — for something. And that is not something to be compromised or amended.”

John’s net worth at the time of his death is unknown but in 2002 he had an estimated networth of $2.5 billion.

John Rigas Cause of Death

His cause of death has not been made public. He was however diagnosed with bladder cancer in 2015 and had spread to his lungs in 2016. At the time, he was given approximately 6 months to live.