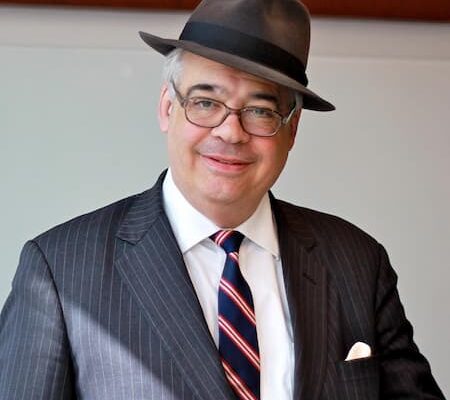 He was born on October 1, 1955 in Newington, Connecticut.

He graduated from Newington High School in suburban Hartford in 1973 and joined Fairfield University in Fairfield, Connecticut graduating in 1977 with a Bachelor of Arts in Political Science.

He is the son of Roslyn Guglielmetti Gizzi and Alessio Gizzi. His mother died on October 26, 2014. Prior to her retirement, she worked as an executive secretary at Conn Acoustics.

Gizzi married his wife Collen House Gizzi in 2002. She is an American politician who served as a member of the Michigan House of Representatives, from 1974 to 1976 and 1983 to 1986. The couple first met in the 1980s but Gizzi had known her for years. She was previously married to John Engler in 1975 but they divorced in 1986.

John has no children.

John serves as a chief political columnist and White House Correspondent for Newsmax. He joined the network in March 2013. He’s been covering politics since 1979 and has been a fixture at White House press briefings since 2001.

He also makes regular appearances on Newsmax TV and did weekly reviews of national news on WMAL-FM Radio in Washington DC. He has also served as a guest contributor to BBC and guest on France24, CroatianTV, German Public Radio and German Radio AWD.

Prior to joining Newsmax, he was a political editor and white house correspondent for Human Events (August 1979 – February 2012). During his tenure, he wrote weekly profiles of three competitive House or Senate races known as “Races of the Week” from 1980-2012. He was also the first national political correspondent to predict the Republican takeover of House and Senate in 1994 midterm elections and predicted exact net gain of House seats Republicans would make in 2010 midterm elections.

He was awarded”William A. Rusher Award for Excellence in Professional Journalism” for 1999 and was named “Journalist of the Year” by the Conservative Political Action Conference in 2002.

Prior to joining journalism, he worked as clerk -typist for Travis County Tax Assessor’s Office.

John is a conservative and has been covering politics since 1979 and has been a fixture at White House press briefings since 2001.

In March 2017 went viral after his glasses, which he had perched on his forehead during an interview fell back onto his nose.

He later explained that while growing up the democratic state chairman and Connecticut the political boss John Bailey wore horn-rimmed glasses and just like him he often had those glasses resting on his forehead. “And on the very rare occasions you’d see him on television, he’d wear his glasses like that. Then he’d make a pronouncement on something, and he would let them drop. Now, I always enjoyed watching that. It symbolized his power and his thinking.”