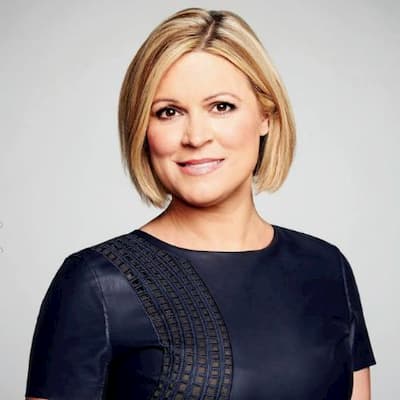 Jennifer Westhoven is an American media personality working as a correspondent for HLN. She covers the economy, business, personal finance and money topics and she is based at CNN headquarters in Atlanta. She previous worked at the international news agency Reuters .

Westhoven earned a bachelor of arts degree in history and political science from Bryn Mawr College.

Jennifer hasn’t revealed any information about her parents.

She was brought up alongside her younger brother whose name is not revealed.

Jennifer Westhoven is married to  Joe Palese ,a professional yoga teacher, musician and composer who completed his first yoga training in 1997 at the World Yoga Center in New York City. In the Spring of 1998, he continued his studies with John Friend, the American yoga teacher who created Anusara Yoga. The duo met when Jennifer took part in his NYC yoga class and they dated for a long time before finally getting engaged in November 2006. They eventually got married on the 15th of October 2007.

Westhoven joined CNN in May 2000, working for both CNN and CNNfn, CNN’s former financial news network, covering many stories live from the floor of the New York Stock Exchange (NYSE). She has covered stories including the financial collapse in 2008, the jobs market, the Sept. 11th terrorist attacks, the Enron scandal, and the rising Chinese economy. Her updates include the latest news from Corporate America, Wall Street and personal finance, and how they affect consumers personally.

Since 2006, she has been a part of the HLN morning show Morning Express with Robin Meade. Her regular segment throughout the morning on “Morning Express” and the Mid-Morning Block of HLN is called Your Money. She also appears regularly in the network’s weekend Clark Howard show and fills in anchoring HLN’s weekend newscasts. Now based in Atlanta, she formerly reported from CNN’s NYC headquarters, as well as the New York Stock Exchange and NASDAQ.

Before CNN, Westhoven worked at the international news agency Reuters. She covered the stock market’s ascent during the tech boom, interviewed top figures in the financial world including stock-market analyst Abby Joseph Cohen of Goldman Sachs, Tyco’s ex-CEO Dennis Kozlowski and Richard Grasso, the former head of the NYSE. Her stories have appeared in newspapers around the world, including the New York Times, the Washington Post, and the Financial Times of London.