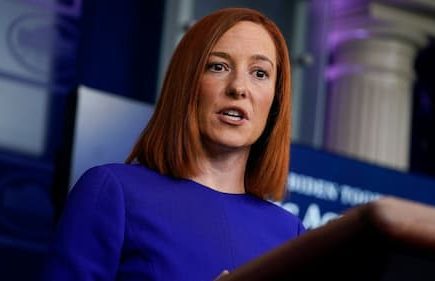 Jen Psaki (Jennifer Rene Psaki) is the former White House press secretary in the Biden administration. She previously served as a CNN contributor and served as the spokesperson for the United States Department of State and held various senior press and communications roles in the Obama White House.

She was born on December 1, 1978 in Stamford, Connecticut, United States.

Psaki is of Irish, Greek, and Polish descent with her Greek roots in Messinia through her father James R. Psaki

She has a bachelor of arts degree in English and Sociology from the College of William & Mary in Williamsburg, Virginia. While at the university she was a competitive backstroke swimmer for the William & Mary Tribe athletic team for two years.

She is a member of the Chi Omega sorority.

Psaki is the daughter of James R. Psaki and Eileen Dolan Medvey. Her father is a retired real estate developer, and her mother is a psychotherapist.

Jen is married to Gregory Mecher, the couple got married on May 8, 2010 at Woodlawn Farm in Ridge, Maryland. Gregory is a Democratic political aide whose recent position was as chief of staff for Rep. Joe Kennedy III of Massachusetts.

The couple met while Mecher was a deputy finance director at the DCCC while Psaki was handling the media for the Democratic Congressional Campaign Committee and Rahm Emanuel, then chairman of the DCCC. The two both had heavy travel schedules, but occasionally found themselves at DCCC headquarters at the same time.

Mecher asked Psaki out to dinner via email. She quickly wrote back saying yes. During dinner they talked about their parents and siblings and shared high school swimming careers. Mecher proposed at home in March 2009.

Jen and her husband have two children together. One of her daughters, Genevieve (Vivi) Mecher gained fame after then US President Barack Obama was pictured with her while crawling on the floor of the presidential office.

Jen is the formerWhite House Press Secretary for the Biden administration. She made her debut as the White House press secretary on January 20, 2020 and promised to bring civility, truth and transparency in her exchanges with reporters. She left the position on May 13, 2022.

She previously worked at the White House during Obama’s administration serving as a department spokesperson at the U.S. Department of State. She later became a White House communication director in 2015, a position she held until the end of the Obama administration.

She began her career working at entry-level positions in Washington, D.C. and briefly wound up in Iowa, where she worked on campaigns for former Iowa Gov. Tom Vilsack and Iowa Sen. Tom Harkin.

She later worked at the Democratic Congressional Campaign Committee. She became a traveling press secretary for Barack Obama during his first presidential run, eventually serving as deputy press secretary and deputy communications director during Obama’s first term, where she was a frequent on-air representative.

On October 31, 2021 Jen revealed she had tested positive of Coronavirus after members of her household did. She said she was disclosing the positive test result “out of an abundance of transparency.”

“On Wednesday, in coordination with senior leadership at the White House and the medical team, I made the decision not to travel on the foreign trip with the President due to a family emergency, which was members of my household testing positive for COVID-19. Since then, I have quarantined and tested negative (via PCR) for COVID on Wednesday, Thursday, Friday, and Saturday. However, today, I tested positive for COVID.

“I will plan to return to work in person at the conclusion of the ten day quarantine following a negative rapid test, which is an additional White House requirement, beyond CDC guidance, taken out of an abundance of caution.”

According to several news outlets Jen is set to join MSNBC in September. According to The New York Times, she could host shows both for MSNBC and for Peacock, the streaming platform of MSNBC’s parent, NBCUniversal. She could also make regular appearances on other MSNBC shows as well as on NBC News. Jen has however not said if she was in talks with MSNBC, saying she had “nothing to confirm about my length of public service or planned service, or anything about consideration about next plans.”

There were also reports that she was being pursued by CNN.