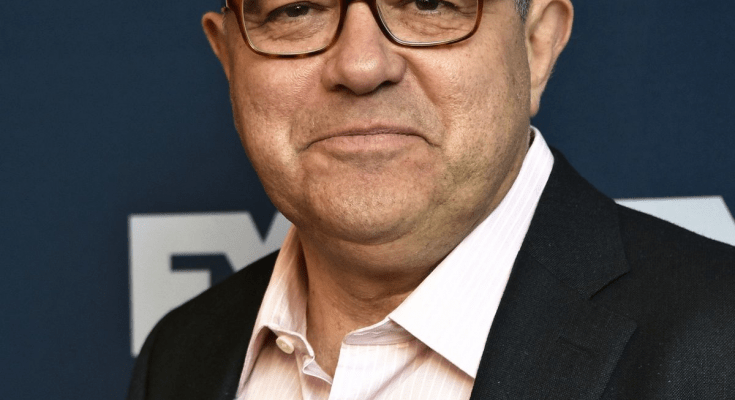 Jeffrey Toobin is an American journalist, lawyer, blogger and author serving as the legal analyst for CNN. In October 2020, he was suspended and then fired from The New Yorker.

He holds an American nationality.

While at Harvard College he covered sports for The Harvard Crimson, where his column was titled “Inner Toobin” and also served as an editor of the Harvard Law Review.

His mother, Marlene Sanders was an American journalist, producer and executive for ABC News in the 1960s and 1970s and moved to CBS News in 1978. She was the first woman to achieve several milestones in the then male-dominated field of television news. Sanders died on July 14, 2015 from cancer.

His father, Jerome Toobin was a producer for Bill Moyers Journal on PBS in the 1970s, and at CBS as well as the director of news and public affairs for New York’s Channel 13 (WNET),from 1974. He died of a heart attack at age 64 and services were held at the Riverside Memorial Chapel.

Jeffrey has a younger sibling by the name Mark. He was born in 1967 with Downs syndrome and he lives apart from the family in a group home in Connecticut.

Toobin married Amy Bennett McIntosh in 1986. They met in college while they worked at The Harvard Crimson.

She graduated in 1980 from Harvard University and holds an MBA degree from Harvard Business School. She worked at Verizon Communications and Zagat Survey.

Toobin had a longtime off-and-on extramarital affair with attorney Casey Greenfield. Casey is the daughter of American television journalist and author Jeff Greenfield and the ex-wife of screenwriter Matt Manfredi.

Matt Manfredi  married Casey Greenfield as his second wife in 2004 since he was a widower. They divorced less than a year later. Casey’s ex- husband has sought treatment on multiple occasions for addictions to alcohol and gambling.

Toobin’s affair with Casey began when Casey was in her 20s and Toobin was also still married to his wife, Amy. Jeffrey and Casey saw each other off and on over the years. Casey later got married to Matt after which they divorced and she started seeing Jeffrey again.

She gave birth to her child with Toobin, a son named Rory, in 2009 and underwent a risky DNA test while pregnant. A Manhattan Family Court judge ordered Toobin to pay for child support after it was confirmed that the child was his. But when he refused to cough up the full amount, Greenfield’s lawyer threatened to tell his employers and garnish his way, prompting Toobin to pay up.

He has three children, two adult children, a daughter, Ellen Toobin and a son, Adam Toobin with his wife, Amy Bennett and Roderick Henry Greenfield born in 2009 with Casey Greenfield.

Toobin joined CNN in 2002 as the chief legal analyst. In 2003, he secured the first interview with Martha Stewart about the insider trading charges against her.

Previously, he started working in 1993 at The New Yorker and became a television legal analyst for ABC in 1996.

Toobin provided broadcast legal analysis on many high-profile cases. In 1994, he broke the story in The New Yorker that the legal team in O. J. Simpson’s criminal trial planned to accuse Mark Fuhrman of planting evidence. He also provided analysis of Michael Jackson’s 2005 child molestation trial, the O. J. Simpson civil case, and prosecutor Kenneth Starr’s investigation of President Bill Clinton. He received a 2000 Emmy Award for his coverage of the Elián González custody saga.

Before, he worked as an Assistant U.S. Attorney for the Eastern District of New York in Brooklyn for three years after which he resigned and abandoned “the practice of law.”

Toobin began his career by freelancing for The New Republic while a law student. After passing the bar, he worked as a law clerk to a federal judge and then as an associate counsel for Independent Counsel Lawrence Walsh during the Iran–Contra affair and Oliver North’s criminal trial.

Following the Zoom incident in October 2020 which led to him being fired from the New Yorker, Toobin asked for some time off from CNN and the network granted it.

Stan Duncan, chief people officer at Condé Nast who owns the New Yorker wrote in an email to employees; “I am writing to share with you that our investigation regarding Toobin is complete, and as a result, he is no longer affiliated with our company.” He continued to say, “I want to assure everyone that we take workplace matters seriously,” Duncan added, “We are committed to fostering an environment where everyone feels respected and upholds our standards of conduct.”

Toobin offered an apology in a statement saying, “I made an embarrassingly stupid mistake, believing I was off-camera. I apologize to my wife, family, friends and co-workers.” “I believed I was not visible on Zoom,” he added. “I thought no one on the Zoom call could see me. I thought I had muted the Zoom video.”

He is the author of seven books. His book The Nine: Inside the Secret World of the Supreme Court (2007) received awards from the Columbia University Graduate School of Journalism and the Nieman Foundation for Journalism at Harvard University.

His next book, The Oath: The Obama White House and the Supreme Court, was published in 2012. American Heiress: The Kidnapping, Crimes and Trial of Patty Hearst came out in 2016. All were New York Times Best Sellers. In 2020, he authored True Crimes and Misdemeanors, the Investigation of Donald Trump, which is described as a condensation of evidence against the character and presidency of Donald Trump as if he were on trial.

He also wrote a book, Opening arguments : a young lawyer’s first case, United States v. Oliver North., about his work in the Office of Independent Counsel, to which Walsh objected. Toobin went to court to affirm his right to publish. Judge John F. Keenan of the United States District Court for the Southern District of New York wrote an opinion that Toobin and his publisher had the right to release this book. Walsh’s appeal of the case was dismissed by the court.