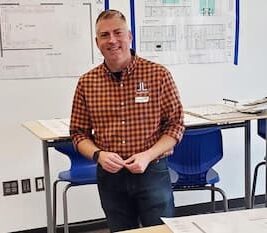 Jeff Laurence is a general contractor and the founder and owner of JL Remodeling Inc. He is also a HGTV contractor who features on HGTV’s ‘Unsellable Houses’.

He graduated from Central Washington University with a bachelor’s degree in business and marketing and a minor in economics. He also has a Business Administration AA certificate from Edmonds College.

Jeff is the son of Vira Laurence, the name of his father is unknown. He has five siblings; Jeanna Flynn, Jinger Plebuch, Joyleen Laurence and Jered Laurence.

Laurence and his wife have four children together; two boys and two girls.

Jeff is the founder and owner of JL Remodeling. He founded the company in February 2001. They specialize in tile as well as bathroom and kitchen remodels. According to his LinkedIn, as a general contractor, he is able to handle complications and problems as they may arise during installations. He has been dedicated to developing and perfecting his craft in tile setting since 2004.

Prior to tile setting J.L. Remodeling was in the business of remodeling kitchens and baths, however Jeff has experience in many types of remodeling projects. J.L. remodeling has built and designed many decks and exterior garden features as well as pool tile, additions, roofing, foundation and hardscapes.

Jeff is the general contractor of HGTV’s Unsellable Houses which features twin real estate consultants Lyndsay Lamb and Leslie Davis. In the show, the twin sisters help homeowners to sell their ordinary homes by giving them all the necessary renovations. They renovate houses that seem lifeless and then sell them at a far better price.

Is Jeff Laurence Related To The Twins

No, Jeff is their workmate but they are not related.