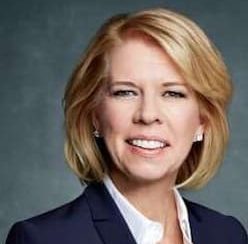 Wells holds bachelor’s degrees in broadcast journalism and philosophy from the University of Southern California, where she graduated with honors.

Jane was born and raised up by her parents in Los Angeles County. However, she hasn’t revealed any information regarding them. It’s also not known if she has any siblings.

Jane is married but she hasn’t revealed any information regarding her husband and its also not known when the two exchanged their marriage vows. The family resides in Los Angeles.

Wells and her husband are proud parents of two children whose identities are not revealed.

Jane currently serves as a special correspondent where she develops features, special reports, and series for CNBC and CNBC.com. Based in Los Angeles, she also contributes to CNBC’s breaking news coverage. Here, she has covered retail, agriculture and defense as well as reports on California’s economy, West Coast real estate and Las Vegas for the network. Wells joined CNBC in 1996, providing special coverage of the O.J. Simpson civil case for “Rivera Live.” During her career at the network, she also served as a senior correspondent for CNBC’s “Upfront Tonight.” She also helped create the “Strange Success” franchise for CNBC Make It, and produces a companion podcast.

Prior to joining CNBC, Wells served as a correspondent for the Fox News Channel and Los Angeles reporter for NBC’s flagship television station, WNBC, New York City. She was also a reporter for KTTV in Los Angeles, where she ventured into the infamous Watts’ Imperial Courts housing project to uncover the story of gangs threatening local residents. She and her cameraman narrowly escaped after they were threatened by a gun-toting gang member. The experience was broadcast to give others a sense of the daily struggles of residents living in inner-city public housing projects.

She also worked as a reporter for WTVJ in Miami and KOB in Albuquerque. She has also taken part in several international reports for CNN. Wells also worked as a news writer for KTLA in Los Angeles. Wells once said her most fascinating assignment was covering the death of Mother Teresa. After the Roman Catholic nun’s death, she recalls visiting a leper colony in India.

She has an estimated net worth of $2million.