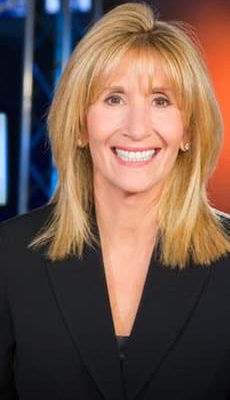 Jamie Sue Gangel is an American television media personality serving as CNN Special Correspondent based in the United States. She previously served as a national correspondent for the NBC News’ Today show as well as a general assignment and political correspondent and was a frequent contributor to NBC Nightly News, Today, Dateline NBC and MSNBC.

Gangel was born in 1955 in New York, United States.

Gangel attended The Dalton School and later graduated from the School of Foreign Service at Georgetown University with a B.S. degree. She also attended Harvard University in 1976, where she studied international economics.

Jamie is the daughter of Richard I. Gangel and Phyllis Gangel-Jacob. Her parents divorced eleven months after her birth.  Her father was a former Vice President of I.O.S. and also worked for Union Official Hotel & Restaurant and was Director Investors Overseas Services, Geneva, as well as Sales director AMREP. He died of lung cancer.  Her mother, a retired justice of the New York Supreme Court, is Jewish and a former Criminal Court judge. She is married to Bernard Jacob, a tenured professor of law at Hofstra University School of Law in Hempstead and a   retired partner of Fried Frank Harris Shriver and Jacobson in New York City.

Jamie is the only child of her parents.

Gangel is married to Daniel Silva, a journalist and author of thriller and espionage novels. He has written 20 more spy novels, all best-sellers on The New York Times list and previously worked as a producer and executive producer for several of CNN’s television programs, including Crossfire and Capital Gang. Silva is the son of Richard Silva  and Carol Silva who were both teachers in the Merced school system. He received his Bachelor of Arts degree from California State University, Fresno. The duo met while they were both correspondents in the Middle East and later married in 1988 at the Mayflower Hotel. Judge Stanley S. Harris of Federal District Court in Washington officiated.

Jamie and her husband are proud parents of twins, Lily and Nicholas.

Over her career, Jamie made headlines with many other exclusive interviews, such as radio host Rush Limbaugh, Chief Justice of the United States William Rehnquist, the first interview with Linda Tripp, legendary American artist Andrew Wyeth, the only television interview with actor Robert Downey Jr. while he was in California State prison, Florida Governor Jeb Bush on his daughter Noelle’s battle with drug addiction, Governor Arnold Schwarzenegger and businessman Ross Perot.

For TODAY, Gangel has reported around the world, from Europe to Africa to South America. In 1987, Gangel covered the Iran-Iraq war as part of the Pentagon pool in the Persian Gulf. In 1986, Gangel covered stories in Central America, reporting on the war between the Nicaraguan government and the Contras. In 1984, she covered the presidential campaigns of Jesse Jackson, John Glenn, and Gary Hart, and the vice-presidential campaign of Geraldine Ferraro. Her features have included profiling the major athletic stars of the Olympics, traveling to the Arctic Circle to observe polar bears, and swimming with sharks in the Caribbean.

Gangel has won numerous awards for reporting, including the Edward R. Murrow Award, presented by the Radio-Television News Directors Association, Gracie Award, by the American Women in Radio and Television, Clarion Award, and the Associated Press Award for Best Spot News Coverage.

She has an estimated net worth of $ 1.5 million.