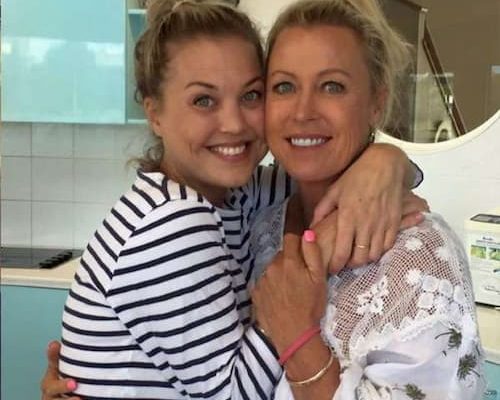 Jaimi Lee Kenny also known as Jaimi Curry Kenny is the eldest daughter of former Olympians Lisa Curry and Grant Kenny. She died on September 14, 2020 at the age of 33 following a long illness.

Jaimi was 33 years old at the time of her death.

Jaimi is the daughter of Grant Kenny and Lisa Curry. Lisa Curry is a former competition swimmer who won 15 gold, seven silver and eight bronze international swimming medals, and is the only Australian swimmer to have held Commonwealth and Australian records in every stroke except backstroke. After retiring from swimming, she competed in surf boat rowing competitions and outrigger canoe events, and her team won the World Championship Outrigger Canoe event in 1997.

Grant Kenny is a former Ironman, surf lifesaver and canoeist. At the age of 16 he won both the Australian Junior and Open Iron Man Championship on the same day. Kenny then won the Australian Open Ironman Title for the following three years.

Lisa and Grant got married in 1986 but divorced in 2009. The former couple co-own the Curry Kenny Aviation Group, which in 2009 owned approximately 60 aircraft.

Lee Kenny had two siblings, Jett Kenny and Morgan Kenny. Jett is a model and television personality. He was signed to Vivien’s model in 2016 and in 2019 he competed in Network Ten’s Dancing with the Stars, placing fourth. After his sister’s death, he paid his tribute in an Instagram post where he posted their photo and said she will be missed by all whose lives she touched.

? I may not have been the best brother to you all the time, I know you thought you weren’t being the big sister I needed all the time, but I do know we loved one another unconditionally all the time. I will love you forever. Rest In Peace my beautiful big sister, the world lost one of its treasures yesterday but heaven gained one. You will be dearly missed by all whose lives you touched ?

Jaimi died on September 14, 2020 at Sunshine Coast University Hospital. Her death was announced by a joint statement from her father, Grant and mother Lisa.

““It is with a very heavy heart that Lisa and I confirm that our beautiful daughter Jaimi has lost her battle with a long-term illness and passed away peacefully in hospital this morning in the company of loving family. Jaimi will forever be remembered as a caring, bright and loving soul who always put others before herself. Our hearts are broken and the pain is immense but we must move forward cherishing every wonderful moment we got to share with our treasured first child.”

On Tuesday morning Lisa paid tribute to her daughter on Instagram where she wrote;

“Our hearts are completely broken. ?So loved. So beautiful. So kind to everyone…. So painful. I can barely breathe,” the 58-year-old began. Jaimi will forever be remembered as a caring, bright and loving soul who always put others before herself. Her love of flowers, cooking, art, decorating, photography, babies, the beach, and helping others will always be remembered.

Our hearts are broken and the pain is unbearable but we cherish every wonderful moment we got to share with our treasured and so loved first child.”

She also thanked the paramedics at Sunshine Coast University Hospital who took care of her daughter.

“We thank all the paramedics, support staff and the incredible team at the Sunshine Coast University Hospital for their tireless commitment to give us the extra time we were able to spend with Jaimi. It goes without saying that this is a very difficult time for our family and all who knew and loved Jaimi so very much.

I just can’t believe you’re not here anymore. I sit and just shake my head. It doesn’t seem real or right. You will forever be with me in my heart Jaimi. I love you so much. ???.”

Jaimi Curry Kenny Illness – What Did Jaimi Kenny Die From

Jaimi’s cause of death has not been revealed but in the joint statement from her parents she died “after a long-term illness”.

The Courier- Mail reported that she had been battling an eating disorder for years and had been receiving care from private clinic End ED on Queensland’s Sunshine Coast in the months before her death.

There is no information that shows that Jaimi Lee Curry had cancer.

According to an exclusive feature on The Daily Telegraph, Jaimi was in a relationship with Lachy Crossley who died in 2017. The couple met after Jaimi returned to the Sunshine Coast from a stint living in Melbourne. They had just moved in when he suddenly died.

The death of Lachy is said to have “plunged Jaimi into depression.” According to Crossley’s mother, Gail “they had plans to be together forever … people described them as a modern-day Romeo and Juliet.”

According to The Daily Telegraph, Jaimi fought a “lengthy and complex alcohol-related health battle” after the death of her boyfriend. The paper reported that after Crossley’s death it worsened Curry’s battle with alcohol, which had first made headlines in 2014 when she drank 16 Strongbow stubbies from 8.30am to 10pm before getting in her car and swerving all over the road. Her blood alcohol level was 0.23 per cent.

According to news.com.au, her lawyer told the Maroochydore Magistrates Court Jaimi had “psychological issues” and had been feeling “unstable” that day. Alcohol had been “a bit of a feature” of her life since another relationship breakdown two years earlier.

“Unfortunately (she) started consuming alcohol to self medicate and that’s obviously quickly become a problem.”

A fake donor box page was made in Lisa Curry’s husband Mark Tabone’s name and shared in the comments of his tribute post to Jaimi, 33, by a fake Facebook profile. Lisa has warned people not to contribute to the donor box or accept friend requests from the same.

“Some people, someone has started a (donorbox) page on Mark Andrew Tabone’s FB page … this is not us. It’s also sending friend requests. Please do not open anything from this fake account.”

The fake fundraising account is using a tribute from Mr Tabone. “As the tears flow and the heart aches, I write this as a tribute to beautiful young lady, who’s life ended way too soon. As your mother & father weep your loss, I too feel lost and heavy hearted. You always put everybody else first. You were gifted with many talents, amazing cook, arts and crafts, writing, and your love and creativity with flowers. Thankyou all for your condolences at this very difficult time for Lisa, Grant & all the Kenny / Curry family. My job now is to nurture my wife through this unimaginable time.”

Tabone said he would be reporting the account and called the action disgusting.