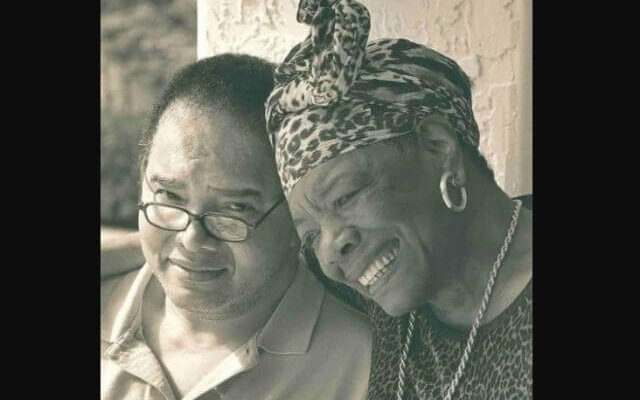 Clyde (who later changed his name to Guy Johnson) was born when Angelou was 17 years old and had just completed her studies at California Labor School.

Guy Johnson managed a bar on Spain’s Costa del Sol after completing his college education in Ghana. He also ran a photo-safari service from London through Morocco and Algeria and worked on oil rigs in Kuwait. Prior to his death, he had worked in the local government of Oakland, Ca, for more than two decades.

Guy Johnson was involved in a car accident that broke when he was17 years old while he and her mom were visiting Kenya. The teenager was fortunate to survive the ordeal but the injuries sustained from the accident plagued him during his life. Twenty years after the accident, the damage had caused him to have calcium deposits on his spinal cord.

Johnson found himself experiencing severe coordination problems. Soon, Angelou’s only child was at the Children’s Hospital in San Francisco, paralyzed from the neck down.

He has a son named Colin whom he was initially separated from at the of five after her mom kidnaped him at the age of 5. Angelou invested in trying to locate her grandson including the hiring of private detectives. Their efforts bore some fruits when she received an anonymous tip from a woman while on a trip to Columbus, Ohio. The woman said she knew where Colin and the mother who had since changed her name to Luke Clark were.

The woman explained she previously lived with Colin and his mother and wanted to help Angelou and Johnson connect with the child. With the help and Angelou’s lawyers, the family was finally reunited.

Colin and his father set up a company, Caged Bird Legacy which up to date manages Angelou’s intellectual property and legacy.

Guy Johnson died on the morning of Wednesday, Feb 16, 2021, at the age of 77 as per an official statement from the official Maya Angelou’s social media handles.  The statement on Angelou’s Facebook page reads, “Mr. GUY JOHNSON passed away peacefully at his home this morning in Oakland, California. Arrangements will be made and announced in the coming days. We ask that you respect the family’s privacy during this difficult time. Thank you for your prayers and words of comfort and strength.”