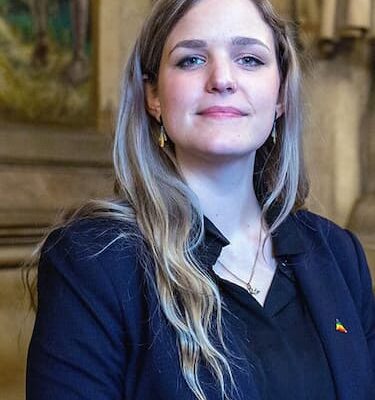 Fuchsia Voremberg is a television personality appearing on BBC’s Antiques Roadshow as a specialist. She works for the London book shop Maggs Bros. Ltd., where she specialises in documents relating to travel and exploration, with a focus on the Polar Regions and Americana. She is also an Associate Director of Maggs Bros.

Her marital status is unknown. She has not revealed details about her family or whether is married or dating.

Fuchsia works at the London book shop Maggs Bros. Ltd. since 2012. She is a member of the Travel department and has issued specialist catalogues on the Polar regions, pirates, and Indigenous Americana. She manages the firm’s appearance at many of the international book fairs.

During an interview she said; ” About five years ago I was offered a week’s casual work packing boxes at Maggs Bros and that was it for me. I was so enchanted with the idea that you could make a life of handling, describing and selling this treasure that I did everything I could to make myself useful. ”

Maggs Bro is one of the longest-established antiquarian booksellers in the world — based in this glorious five-storey townhouse and mews at 50 Berkeley Square for 80-odd years.

Maggs Bros deals in both the most expensive rarities (it currently offers an original copy of the earliest known collection of fly-fishing patterns, dating back to the 15th-century, for £125,000) and the lesser rarities (a trade magazine from 1935 about China’s food industry for £4,000), along with mere second-hand books at various levels of value (a 1997 signed edition of Enduring Love by Ian McEwan for £75).

Fuchsia joined Antiques Roadshow in 2018 where she appears as a books and manuscripts specialist. She specialises in documents relating to travel and exploration, with a focus on the Polar Regions and Americana. She has an eye for the unusual, including the history of witchcraft and spiritualism.