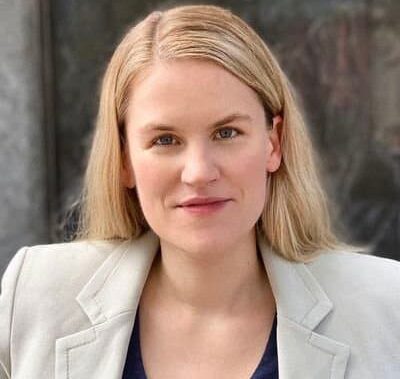 Frances Haugen is a specialist in algorithmic product management who has worked on ranking algorithms at Google, Pinterest, Yelp and Facebook as a former product manager. On October 3, 2021 she revealed herself to be “Sean,” the whistle-blower against Facebook.

She studied electrical and computer engineering at Olin College and got an M.B.A. in General Management from Harvard.

Frances has not revealed the identity of her parents but she has said she was born in Iowa City, Iowa and her parents are professors. She has also added that she grew up attending the Iowa caucuses with her parents, instilling a strong sense of pride in democracy and responsibility for civic participation.

She has not revealed whether she is married or not.

She worked as an associate producr manager at Google where she helped launch google Books first API and guided/worked with multiple integration partners around the world. She was later promoted to product manager. She helped design and launch Google’s first mobile book reading experience/application. She also discovered and developed an algorithm for building book search indices. She also helped design and launch a system of creating (beautiful) covers for 300k public domain books.

In October 2009 she became a software engineer. She wrote logging data analysis library, designed and developed new interfaces/interactions for search and information retrieval from Books. In June 2011 she was promoted to product manager. She served in the position until January 2014.

In February 2011 she co-founded Hinge. She co-founded d Secret Agent Cupid, the precursor to Hinge in 2010, and took it to market.

She joined Pinterest in August 2016 as a product manager. She lead ranking Ranking Product Manager for Home Feed Ranking and Related Pins. She developed comprehensive health metrics to prevent over-optimization of ranking to short-term outcomes at the expense of long-term product health.

She also helped found and lead working group to optimize the home feed for topical variety in addition to relevance to counter-act the natural tendency of the system towards engagement-suppressing homogeneity.

She also founded an initiative to address bias in the machine learning models and lead an external partnership to provide coloration data on Pinterest’ content.

Prior to joining Pinterest, she was a product manager at Yelp where she founded the Photo Quality team and developed a deep learning ML system for algorithmically determining the quality of a photo.

Haugen is a former Facebook product manager who resigned in May 2021. She joined Facebook in June 2019 as the Lead Product Manager on the Civic Misinformation team, which dealt with issues related to democracy and misinformation, and later also worked on counter-espionage.

On her website, she alleges that she became “increasingly alarmed by the choices the company makes prioritizing their own profits over public safety and putting people’s lives at risk. As a last resort and at great personal risk, Frances made the courageous decision to blow the whistle on Facebook.”

After leaving Facebook, she contacted John Tye, the founder of Whistleblower Aid, a legal nonprofit that represents people seeking to expose potential lawbreaking. She told Tye and his team that she had access to tens of thousands of pages of internal documents from Facebook. She asked for legal protection and a path to releasing the confidential information.

On October 3, 2021 during an interview with ’60 Minutes’ she revealed that she was “Sean” the whistle-blower against Facebook. She has used the documents she amassed to expose how much Facebook knew about the harms that it was causing and provided the evidence to lawmakers, regulators and the news media.

She alleged that the company put repeatedly put its own interests first rather than the public’s interest. This lead to her copying pages of Facebook’s internal research and decided to do something about it.

“I’ve seen a bunch of social networks and it was substantially worse at Facebook than what I had seen before. Facebook, over and over again, has shown it chooses profit over safety.”

Haugen had previously given many of the documents to The Wall Street Journal, which in September began publishing the findings. The revelations — including that Facebook knew Instagram was worsening body image issues among teenagers and that it had a two-tier justice system — have spurred criticism from lawmakers, regulators and the public.

According to The New York Times, she has “also filed a whistle-blower complaint with the Securities and Exchange Commission, accusing Facebook of misleading investors with public statements that did not match its internal actions. And she has talked with lawmakers such as Senator Richard Blumenthal, a Democrat of Connecticut, and Senator Marsha Blackburn, a Republican of Tennessee, and shared subsets of the documents with them.”

On October 5, she is set to testify in Congress about Facebook’s impact on young users.

Her net worth is estimated to be around $500 million.