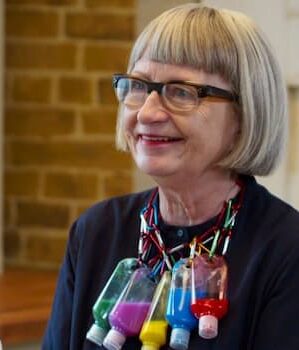 Esme Young is an English fashion designer, sewer and television personality. She is one of the judges on BBC’s reality series The Great British Sewing Bee and also teaches at London’d Central St Martin’s College.

She began her career in the early 70s by setting up fashion business Swanky Modes with three friends in Camden, North London. The label gained iconic status and its signature body-con dresses were loved by celebrities such as Cher, Grace Jones and Julie Christie. She made the famous ‘bunny girl’ outfit that Renée Zellweger wore in Bridget Jones’s Diary.

She was born in February 1949 in Bedfordshire, England.

She stands at a height of 5 feet 9 inches.

She attended a convent school and later joined St Martin’s College of Art where she met Millie Walters and ended up modeling for her. She helped her with her final collection at college.

Young has managed to keep her personal life very private. Her marital status is unknown.

Esme has said she first learnt to sew at school when they did sewing, embroidery and knitting. At the age of 7, she made her first item of clothing which was a gathered skirt. She said suring an interview that she used to make her own clothes to go out in buying clothes from charity shops and altering them.

“As a teenager, I’d make outfits for nights out. To begin with, they were quite dreadfully made. The clothes were awfully finished, with no facings, but I felt very proud of them. My mother made things, too. In fact, I’ve still got her sewing machine. It’s one of those old ones – not with a treadle, but with a handle you turned.”

She normally cuts all her own patterns, rather than working from a commercial pattern. She has also added that she finds sewing therapeutic. “You are solving problems and you are slowing down and having to be imaginative. I think it works on a lot of levels as you have to focus on a project, and a change from sitting just looking at a screen.”

In 1972, alongside her friends; Willie Walters, Melanie Langer, Judy Dewsbery they opened a London based shop and label called ‘Swanky Modes’ but it closed in 1993.

In the mid 1980’s she opened her own studio after she started doing work with independent stylists and costume designers. She began working with various talent on films, adverts, pop videos and made bespoke clothes.

Some of the high profile campaigns she has worked for include: Tia Maria (with Iman), Levi’s, Boots No 7, Marlborough, De Beers, Pretty Polly tights, Max Factor, Yardley and Rimmel.

Who has Esme Young Designed For?

Some of the film costumes that Esme has designed include:

Esme was a co-founder of Swanky Modes alongside Willie Walters, Judy Dewsbury and Melanie Langer. They opened a small shop in Camden Town in 1972 selling their own designs. They designed clothes according to their own aesthetic and used vintage fabrics which were available in limited supplies, often as personal orders. They shut down the shop in 1993.

In 2020 Esme hosted an exhibition of her iconic 1970s designs from fashion and film. The Swanky Modes London exhibition was held at The Stitch Festival at The Business Design Centre in London from 27th February – 1st March 2020.

The exhibition featured garments from her 1970s Swanky Modes collection. The garments included the Plastic Mac and Padlock Dress, Amorphous dress and Flasher Dress, and Flap Top and Trousers. There were alsi the outfits that she designed for Bridget Jones’s Diary, Trainspotting and other well-known films.

“St Martin’s College is a great place to work, the students are so talented and not difficult to teach. It’s probably one of the only colleges in the world where it’s all about the students, and just trying to make the individual student’s vision happen.

I have been teaching via Microsoft, and it was hard to get used to at first and then became the new norm. It was particularly difficult when you are trying to show something 3D, so I rigged up a tripod that my phone could go in, so I could demonstrate the techniques. It’s not the same as being in a class but I guess we have to just do what we can do.”

Young is one of the judges on BBC2 talent show ‘The Great British Sewing Bee’ alongside Patrick Grant. She joined joined the show in 2016.  During an interview she said she got the job as a judge after she met a producer at a dinner party and thought she would be good in the series, the producer introduced her to Susanne Rock, the executive producer of the show.

Her actual net worth is unknown. She has however said that despite her sucess on television and sewing career she has never been paid ‘sily money’ for a job. She added that she earned her highest wage of her life while appearing on The Great British Sewing Bee.

“Appearing on the BBC did pay well, but it was not a huge amount of money. Even making clothes for Hollywood films, you do not get paid silly money. It is hard work and takes time.”

She also added that she still rents the London property she lives in since the 1980s after being made homeless and added she will rely on a tate pension when the time comes, although she hopes to “carry on working until I drop”.

Esme once said she watched the carnival with David Bowie. This was after judge Patrick Grant asked her if she has ever been to Carnival. This was during transformation challenge on Wednesday night’s final when contestants were tasked with making carnival outfits out of prom dresses and swimwear.

I have actually, I’ve been to the Notting Hill Carnival. I’ve sat on a window ledge with David Bowie watching the carnival – but we weren’t wearing feathers.’