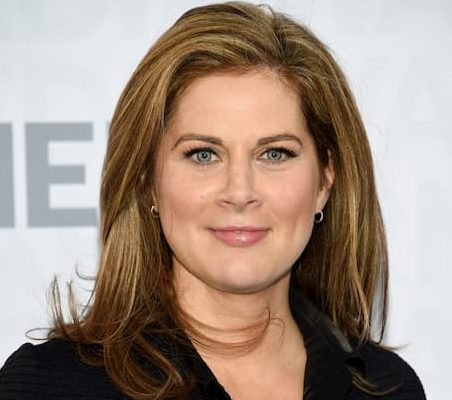 Erin stands at a height of 5 feet 6 inches tall.

She is of Irish and Scottish ancestry.

She graduated from Williams College in Williamstown, Massachusetts, with a Bachelor’s degree in Political Economy.

Erin is the daughter of Esther Margaret (née Stewart) and Kenneth King Burnett, a corporate attorney who serves as a partner at Webb, Burnett.

Burnett is the youngest of three girls. Her sisters are Mara and Laurie

Burnett is married to Thomas Rubulotta since 2012. He is the managing director of Citibank and previously worked as a trader with the Lehman Brothers. The couple met on a blind date back in the early 2000s and got engaged in 2011. The couple also worked together when Burnett served as vice president at Citigroup.

Burnett joined CNN in October 2011 where she anchors ‘Erin Burnett OutFront’ which airs every night on CNN at 7pmET, a dynamic nightly news program that provides in-depth analysis, compelling newsmaker interviews, and lively debates on the day’s top issues. She also anchors a weekly show, Erin Burnett OutFront International on CNN International and serves as the network’s Chief Business and Economics Correspondent.

She was a moderator of CNN’s 2020 Democratic Presidential Primary Debate in Ohio and she also moderated Town Halls with candidates, including former Vice President Joe Biden and Senator Kamala Harris.

During her tenure at CNN, she has reported from around the world, including Iran, Afghanistan, Cuba and across Africa and Asia. Her investigative report on terror funding identified a Qatari financier whom the U.S. Treasury Department subsequently designated a global terrorist. Burnett’s national security coverage also includes a one-hour documentary “The Truth About Benghazi.”

She also anchored the documentary “The Trump Family Business” which explored President Trump’s ongoing business ties. On the centennial anniversary of the 19th amendment, she also hosted the documentary “Women Represented: The 100 Year Battle for Equality” which tackled the complex history of the suffrage movement.

Prior to joining CNN, she worked at CNBC/NBC News where she anchored Street Signs and co-anchored Squawk on the Street with Mark Haines and contributed to Meet the Press. In December 2010 she presented an investigative report on chemical giant Transammonia doing business in Iran. As a result of the report, Transammonia sent a press release to congressional leaders stating that Transammonia’s Swiss subsidiary would not enter into new contracts with Iranian companies and would wind down its business with Iran “as soon as possible.”

During the tenure, she broadcasted from Cairo during the Egyptian revolution and from Nigeria after the attempted terror bombing of a Detroit-bound jet. Burnett also produced and anchored documentaries on India, Russia, Iraq, Dubai and Africa.

She began her career as a financial analyst for Goldman Sachs in their investment banking division, where she worked on mergers and acquisitions and corporate finance. She later joined CNN as a writer and booker for CNN’s Moneyline with Stuart Varney, Willow Bay, and Lou Dobbs. She left the position to serve as vice president of Citigroup’s digital media group, CitiMedia. She later joined Bloomberg Television as Stocks Editor and anchor.

She earns an annual salary of $3 million.

Erin earns an estimated net worth of $16 million.