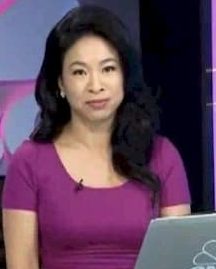 Emily Chan Tan is a Chinese media personality serving as a Correspondent for CNBC International based in Hong Kong and covers breaking business and financial stories on Hong Kong, China and Taiwan markets. She previously worked at television Broadcasts Ltd as an anchor and senior reporter and has also worked at Bloomberg and CNN.

Emily was born in China but the exact date, month and year of birth are not known.

Emily holds a Bachelor of Arts in Broadcast Journalism from the University of Southern California’s Annenberg School for Communication.

Chan was born and raised by her parents but she has kept her family life off the limelight and therefore she has not revealed the identity of her parents. It’s also not known if she has any siblings.

Emily is the mother of three sons whose identity she hasn’t disclosed.

Tan joined CNBC in 2007. She is currently based in Hong Kong and serves as a Correspondent for CNBC International and covers breaking business and financial stories on Hong Kong, China and Taiwan markets.

.As the lead Hong Kong market reporter, she has covered major developments in the stock market including the Stock and Bond Connects, listing reforms and major IPOs including Alibaba, Xiaomi and Meituan Dianping. Over the years, she has also covered major news events such as the Taiwanese Presidential elections in 2008, 2012 and 2020, Hong Kong’s Umbrella movement in 2014 to the social unrest in 2019, and the impact of severe weather events such as super typhoons Mangkhut and Hato.

She also fronted CNBC’s travel luxury programme ‘First Class’ where she traveled to Hainan, Shanghai, Macau and Hong Kong to explore how the well-heeled experience travel in these world-class cities. Prior to joining CNBC, she was a member of the news team at Hong Kong’s Television Broadcasts Ltd. (TVB), anchoring nightly newscasts and covering local daily assignments as a senior reporter. She has also worked at Bloomberg and CNN.

Her average annual salary is not available.