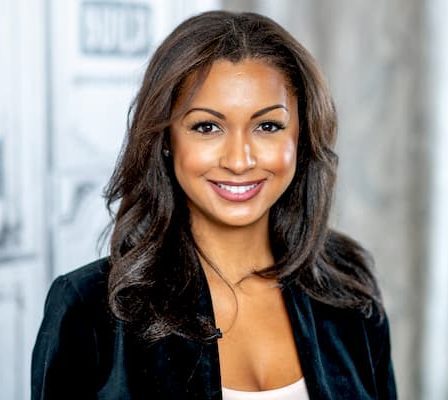 Who is Eboni K. Williams

Eboni K. Williams is an American attorney, author and television personality serving as a host and executive producer of REVOLT Black News. She is also a co-host on the hip hop talk show ‘State of the Culture’, which airs on REVOLT TV.

Eboni stands at a height of 5 feet 1 inch tall.

She belongs to black ethnicity.

In 2004 she graduated with a Bachelor of Arts degree in Communications and African Studies from the University of North Carolina at Chapel Hill. She earned her J.D. degree from Loyola University New Orleans College of Law.

She was raised by a single mother but details about her are minimal.

Eboni is not married. During an interview with Essence she admitted that she’s not going to be “a typical housewife,” but that doesn’t mean she isn’t thinking about having a family in the future.

Eboni is a member of the Alpha Kappa Alpha Incorporated sorority, which was founded at HBCU campus Howard University in 1908. The principles of the foundation are to build women into unstoppable individuals who can take over the world while uniting women as one.

So blessed to celebrate my AKAversary with my 7 #PrettyPowerful linesisters this weekend! We’ve grown together in Supreme Service and Sisterhood and I can’t wait to see what our futures hold??? #aka1908 #5YearsOld #EthelTaughtUs #ServiceToAllMankind #Sisterhood

Eboni specialized in family law and civil litigation, providing legal consult on high-profile divorce, spousal support, and child custody cases. Eboni then transitioned into practicing as a public defender, as well as a private defense lawyer in North Carolina and throughout the Greater Los Angeles area. She has represented clients in criminal matters including murders, rapes, high volume drug cases, sex crimes, and federal offenses.

She began her professional experience in Louisiana in the wake of Hurricane Katrina. As a law student, Eboni clerked for the Louisiana Secretary of State and the Louisiana Attorney General’s Office. She also worked for various politicians, including New Orleans City Council Members, supporting efforts to rebuild the city of New Orleans.

She is also an actress who made her acting debut as Chloe Robinson in “Mean Mr. Greene” in 2009. She then appeared in an episode of “1000 Ways to Die.” In 2012 she appeared on “Against the Grain” playing the role of Ebony. In 2017 she portrayed Paula Lloyd in “Crossing Thresholds”.

Eboni co-hosted Fox News Specialists since 2015 but she left in 2018. In 2019 during an interview on the radio show “The Breakfast Club,” she said Fox has a reputation for bigotry and racism “for very good reason.”

She said the key to understanding the widely watched conservative network was in making sense of its founder Roger Ailes. Ailes died at the age of 77 in 2017, a year after leaving the network amid a sexual misconduct scandal. She said Ailes had only one mission in mind for the network ― and that was “the demonizing of the other.” It was “literally the purpose of why the network was founded.”

“I don’t know what his beliefs are, but what he knew was it would be very profitable. OK, when you find a fear-based thing like that and you can capitalize on it, in a unique way, no one had ever done this before.”

She added that she went there because she felt she was going to be a savior of sorts.

“I went there because I felt I was going to be a savior of sorts, and talk to the people in the middle, that still watch that network because whether we like it or not, Fox is No. 1 for a reason.”

. @EboniKWilliams describes the idea behind #FoxNews and why she decided to leave as a correspondent. pic.twitter.com/OR1EOjjVuN

Eboni serves as a host and executive producer of REVOLT Black News. She is also a co-host on the hip hop talk show ‘State of the Culture’, which airs on REVOLT TV.

She made her television debut appearing in “Cashin’ In” making appearances in six episodes. In 2013 she joined “Hannity”, a series led by Sean Hannity, and over the course of several following years, she served as a radio talk show hostess.

In 2014 she began working on “The Kelly File” alongside Megyn Kelly. She then joined the cast of “Red Eye w/Tom Shillue”, a comedy news talk show hosted by Andrew Levy, Greg Gutfeld and Joanne Nosuchinsky. In 2016 she served as a hostess of “Outnumbered” and additionally appeared in “First Things First”.

In 2020 she joined the cast of Bravo’s Real Housewives Of New York City, making her the first Black ‘housewife’ on the network’s hit series.

In a statement, she said she was excited to join the franchise as the first black housewife. “NYC is filled with successful and dynamic Black women. I’m excited to join this legendary franchise as the first Black housewife. Can’t wait to share a slice of life in this city that hasn’t been seen before. Anyone who’s aware of my work knows I don’t hold back. I’m going to keep it just as real here as I do everywhere else.”

During an interview with Essence, she said she was honored and thrilled to become the first black woman in the franchise or the first time in 13 years.

“This franchise historically has not had a Black lens and now it will for the first time in 13 years. I’m beyond. I’m thrilled. I’m honored. It is my great hope that my presence on this show will just do it justice. Do Black women justice. Do our culture justice. I can only hope to touch on the magic that are Black women.”

Eboni released her memoir, Pretty Powerful: Appearance, Substance & Success in 2017. According to the memoir’s description on Amazon, Eboni’s rejection of the narrative that “being pretty comes at the expense of being taken seriously.”

“If a woman is physically attractive, there is often a presumption that she lacks the substance and smarts necessary to provide leadership in business and other endeavors. This narrative implies that being pretty and being capable are mutually exclusive. But… Eboni Williams rejects that narrative.

She says that to accept the false notion that beauty and power are mutually exclusive is to leave an incredibly powerful tool on the table. According to Williams, the knee-jerk reaction for most women is to feel shamed by the potential advantage their beauty grants them, but Williams says it’s okay for women to take full advantage of the most immediate and obvious attribute at their disposal, encouraging women to embrace their beauty as positive and powerful.”

Her actual net worth is unknown but is estimated to be above $2 million.

She has not revealed his political affiliation.