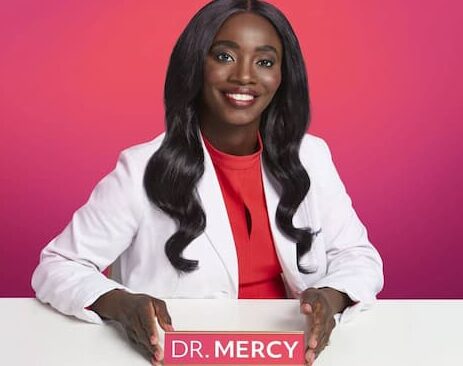 Dr. Mercy Odueyungbo is a board-certified dermatologist and cosmetic surgeon. She is the founder and medical director of Lilly Dermatology. She is the host of TLC series Dr. Mercy.

Mercy was born in Nigeria and at the age of 10, she relocated to the United States.

She completed her undergraduate studies at the University of Iowa in Microbiology. Dr. Odueyungbo graduated from Indiana University School of Medicine. She continued her post-graduate studies at Northwestern Memorial Hospital in Chicago before completing her dermatology residency at Mount Sinai-St.Luke’s Roosevelt Hospital in New York City. After her residency, she went on to complete her training in Mohs Micrographic Surgery at Mount Sinai Cancer Comprehensive Center in New York City.

She is the daughter of Fola Odueyungbo and Modupe Odueyungbo. Her father is a nurse and the CEO at MOST Specialist Services PC in Flossmoor, Illinois since June 2005. He studied MS Biology at Southern Connecticut State University and BS at Governors State University. He also went to the school of nursing Ijebu Ode and Molusi College Ijebu Igbo.

She belongs to the Nigerian ethnicity.

Mercy is married to Antonio (Tony) Jackson since November 7, 2015. Tony is a former NFL player, he was selected in the 2005 NFL Draft, he played with the Seattle Seahawks, the New York Giants, and the Oakland Raiders before he was released in 2008. He helps run the administrative affairs of Lilly Dermatology.

The couple met in 2002 when Tony was playing at the Univesity of Lowa. Tony “physically” ran into Odueyungbo at a student union gathering. Odueyungbo asked for an apology but Tony was dumbstruck to respond but it wasn’t due to lack of manners but because he was drawn to her brown eyes.

Tony later requested her to become his science tutor. Their friendship later turned into romance when Odueyungbo went to med school. In 2015 Tony asked Odueyungbo’s parents for their blessing and planned a proposal with her family’s help. Jackson was in Detroit while Odueyungbo was doing her residency in the Big Apple. So Odueyungbo’s sister Ope faked a medical emergency to get her to come to the venue where Jackson proposed.

Mercy has a daughter known as Lily born in 2018.

Dr.Odueyungbo is a board-certified dermatologist and cosmetic surgeon who provides services specifically tailored to the individual patient. She is a fellow of the American Academy of Dermatology, American College of Mohs Surgery and a member of several professional societies including the American Society for Dermatologic Surgery.

She also holds a special interest in aesthetic enhancements including botox, fillers, laser treatments and has completed extensive training in liposuction surgery.

Dr. Mercy debuted her show on TLC “Dr. Mercy” on September 22. In the show, she tackles some of the most unusual and extreme skin cases. She is passionate and determined to help all her patients find some relief, no matter the issue. The show will also give a behind-the-scenes look at her dermatology practice.

Dr. Mercy revealed that TLC found her on Instagram back in 2019. They reached out to her and discussed their desire to add more medical shows to the roster. They filmed the pilot, and they immediately offered her an entire season. The TLC production staff scoured the country, looking for patients for the show. They utilized social media, ads at hospitals, and referrals.

She has an estimated net worth of more than $1.5 million.