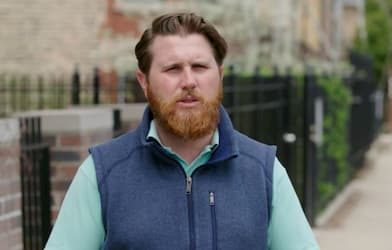 Donovan Eckhardt is a property developer and founder of Greymark Development Group, a real estate company. He is a former contractor on HGTV’s reality show Windy City Rehab alongside interior designer Alison Victoria.

He was born on November 25, 1979 in Arlington Heights, Illinois.

Eckhardt went to the University of Illinois at Urbana-Champaign and received both bachelor’s and master’s degrees in architecture.

He is the son of Thomas D. Eckhardt, an architect who is the founder and president of CD Group. A company that provides both full-service architectural design and comprehensive construction services. He has not revealed the name of her mother but he posts her on his social media.

He is married to Erica Eckhardt since 2012.

Donovan is a father of two daughters; Charlotte born in July 2014 and the second child born in 2015.

Donovan and Alison Victoria were co-stars on HGTV’s Windy City Rehab. Donovan was a contractor on the first season but he didn’t return during the second season.  The co-stars collaborated on a bunch of projects, with the most famous one being the renovation of a 4,000-square-foot luxury home in Lincoln Square.

On December 30, 2019, Alison Victoria and Donovan Eckhardt, along with Eckhardt’s Greymark Development Group, Alison Victoria Interiors Inc., two other related business entities and contractor Ermin Pajazetovic were sued by James and Anna Morrissey. In the suit, the couple alleged defective and shoddy work, breach of contract, breach of warranty and consumer fraud.

The couple alleged that the upper-floor shower leaked gallons of water into the kitchen ceiling below. The suit adds that it got worse with a leaky roof, poorly installed windows and other issues.

The lawsuit demanded the reversal of the sale, plus $80,000 the Morrisseys say they paid for upgrades and landscaping. It also seeks unspecified damages for emotional distress and punitive damages.

In April 2020 thy had been sued by buyers Shane Jones and Samantha Mostaccio. The lawsuit focused mainly on garage behind the property that the couple wanted renovated so that Mostaccio could do individual pilates training and film videos to stream for her fitness business. In the lawsuit the couple claims the garage work was never properly completed and the and the work that was done was without a building permit, leading the city to shut down the site.

They alleged that the garage was left exposed to the elements and had rotting wood, damaged drywall and damaged electrical wiring, among other issues. In addition, the couple found various other problems on the property, including electrical outlets in the kitchen not up to code, water infiltrating the exterior walls of the home and garage, poorly pitched landscaping, cracked concrete load-bearing columns on the corner of the house and a “sewage” odor and mold in the basement, the suit said, citing close to $102,000 in needed repairs. The lawsuit claimed Victoria and Eckhardt, who paid $780,000 for the property and sunk another $520,000 into renovations, were desperate to unload the home.

In June 2020 Windy City Rehab was sued again by Michael Ward Jr. and his father and brother who alleged that Alison and Donovan ran a “deliberate and fraudulent scheme to misappropriate” $3 million in funds.

The Ward Family claimed it deployed $3 million for a 50% stake in Alovanward LLC, which funded seven projects in all. The Wards say they’re owed nearly $2 million as well as punitive damages. Eckhardt didn’t comment, but Allison repeated her claim that Eckhardt was the licensed developer and contractor on the projects and she merely did design work.

He has an estimated net worth of $3.5 million.

According to People magazine, Donovan has filed a $2.2M lawsuit claiming defamation and emotional distress as a result of his portrayal as a fraudulent “villain” on the second season of the hit HGTV show. According to the lawsuit he is suing Discovery Inc. (HGTV’s parent company) and Big Table Media (Windy City Rehab’s production company) claiming that the series was scripted and edited to make him look like the bad guy, and Victoria, the victim.

In the filing he goes through each episode of the series’ second season, explaining how he feels he was inaccurately portrayed in each. He claims that the allegations of mishandling and stealing company finances, poor communication with Victoria, an inability to perform and a lack of integrity are all false.

He also alleges that he was “placed under constant pressure by Big Table Media to complete the projects being filmed for season one,” and that “aggressive filming and production deadlines” from the network and production company were to blame for many of the stop-work orders, construction problems, blocked permits and license suspensions that he and Victoria faced over the past several years, all of which, he says led to legal troubles for the pair.

He adds that due to the time constraints, he and Victoria “proceeded with certain work without obtaining approved amendments to necessary permits, without completed inspections, and ultimately received various building code citations which resulted in the temporary suspension of both of their respective licenses and privileges to apply for building permits.”

He claimed that the dramatic scenes in season 2 were “carefully scripted, choreographed and edited” to lay the blame on him. He says he was presented as “the villain and cause” and “Alison as the unknowing, innocent victim of all of the issues, which Alison allegedly encountered in Season 2 as well as Alison’s claimed financial ruin.”