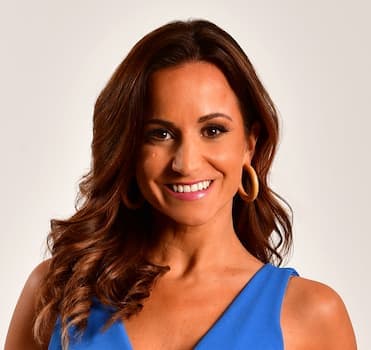 Dianna Marie Russini is an American sports reporter who presently works for ESPN on NFL Countdown and NFL Live as an NFL host, reporter, insider, and commentator. In July 2015, Russini joined ESPN as a SportsCenter anchor.

She is of Italian descent from Jersey with an American nationality.

Dianna attended Old Tappan’s Northern Valley Regional High School. She had completed her studies at George Mason University and had received her diploma.

She is the beloved daughter of Camille and Rick Russini. Her grandmother is Lorraine.

She has a brother and a sister named Nicole.

Did Dianna Russini get married?

Russini has been happily married to her husband Kevin Goldschmidt. They have been married since September 26, 2020 Kevin Goldschmidt is the Director of Total Rewards at Shake Shack.  Kevin had lived and worked in Pennsylvania before relocating to New York.

She is a loving mother of one, a son, whom she named Michael Andrew.

Russini is a year-round contributor to ESPN’s pro football coverage as a reporter and host. She began working for the organization in July of 2015. In addition, she was a color commentator for ESPN’s season-opening game between the Denver Broncos and the Oakland Raiders on Monday Night Football in 2019. She has worked as an ESPN Radio correspondent for NFL game broadcasts. Diana has also been a reporter for the first season of XFL games on ABC in 2020. Before the 2019 AFC Championship, Russini had an exclusive interview with Le’Veon Bell. Others were with Titans All-Pro running back Derrick Henry and head coach Mike Vrabel.

Additionally, Russini has also broken several NFL stories, including the Saints’ decision to re-sign starting quarterback Drew Brees. She broadcasted the Washington Football team’s decision to draft Dwayne Haskins and the role of ownership in the decision. Russini gave information about how Tampa Bay landed Tom Brady, Julio Jones signing with the Titans, and Trent Williams re-signing with the 49ers and becoming the highest-paid offensive lineman in NFL history.

Along with that, Russini first appeared on the Around the Horn panel in 2019. She’s also hosted ESPN digital specials, including a Red Carpet special with Cassidy Hubbarth and Katie Nolan at the 2019 ESPYS. Prior to joining ESPN, Russini worked at WRC-TV (NBC4) in Washington, D.C. She’s also worked at Comcast Sports in Seattle, WNBC in New York City, and News 12 Westchester in New York. She began her television career as an intern for Diane Sawyer and WABC at ABC News.

She was a four-year soccer player at George Mason University. In 51 appearances for George Mason, she scored seven goals and had one assist.

She has amassed a networth estimate of $ 2 million