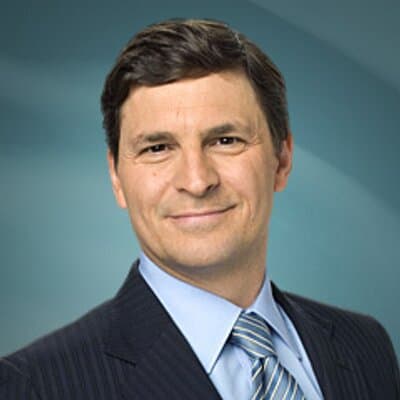 David H. Faber is an American media personality serving as a financial and market news analyst for CNBC. He co-hosts the station’s morning show Squawk on the Street and previously worked for the magazine Institutional Investor and also made regular appearances on NBC news show  “Today” as a business news expert.

David attended Trinity school in New York and later graduated from Tufts University with a degree in English.

David is the son of Norman L. Faber and Belle B. Faber. His mother is the associate executive director of the American Jewish Congress in New York while his father on the other hand is a lawyer in New York and a graduate of New York University School of Law. David belongs to mixed ethnicity as his mother is of Polish Jew origin whereas his father is of English and Swiss-German descent.

He has not revealed any information regarding his siblings and it’s therefore not known if he has any.

David is married to Jenny Harris, the executive producer of ”Moneyline News Hour” at CNN in New York. She graduated from Cornell University and she is the daughter of Marie Masters and Jay Harris, both of New York.   Her mother, an actress, plays Dr. Susan Stewart on the CBS soap opera ”As the World Turns.” while her father is a lawyer at Hall Dickler Kent Friedman & Wood, a law firm in New York. He was also a producer of ”Side Man,” which ran on Broadway in 1998 and 1999. She has a fraternal twin sister musician Jesse Harris. The duo exchanged their marriage vows on 16 January 2000 with Rabbi Judith Lewis performing the ceremony at the Rainbow Room.

David and his wife are proud parents to two kids, a son and a daughter but they have kept their children off the limelight and haven’t revealed their names.

With the coronavirus pandemic quarantine forcing T.V. anchors to report to millions of viewers from home, their interior decor has been on display and up for critique. Much of the commentary is not entirely positive, but  Faber has received internet-wide praise. His home has been called “the best Skype room on all of cable T.V.” It received a 9 out of 10 on the Twitter feed Room Rater (missing a 10 only because the TV was on), and that post had nearly 600 likes. The inviting scene is the work of interior designer Beverly Bartfeld, a close friend of Faber and his wife, who also designed the family’s home in NYC. “It’s pretty funny—friends and sources, people I’m on the phone with all day, people I haven’t spoken to in a while, the first thing they say is, ‘I love your house,’” Faber said in an interview.

Faber joined CNBC in 1993 and has been dubbed “The Brain” by CNBC co-workers. He currently is a co-anchor of  “Squawk on the Street” (M-F, 9 AM-11 AM ET) and an anchor and co-producer of CNBC’s acclaimed original documentaries and long-form programming. During the day, Faber breaks news and provides in-depth analysis on a range of business topics during the “Faber Report.”

David has broken many big financial stories, including Disney’s deal to buy most of Twenty-First Century Fox’s assets, the massive fraud at WorldCom and Rupert Murdoch’s unsolicited bid for Dow Jones. He also hosts the network’s monthly program, Business Nation, which debuted on January 24, 2007, and has hosted several documentaries on corporations, such as Wal-Mart and eBay. Prior to joining CNBC, Faber previously worked for seven years at Institutional Investor.

Faber is the author of several books including The Faber Report published in2002 by Little Brown, And Then the Roof Caved published in 2009 by John Wiley. and House of Cards: The Origins of the Collapse published in 2010.

Faber has reported 10 documentaries for CNBC for which he has received Loeb, Emmy, Peabody and duPont awards.The Age of Walmart earned him a 2005 Peabody Award and an Alfred I. duPont-Columbia University Award for Broadcast Journalism. In 2010, he shared the Gerald Loeb Award for Television Enterprise business journalism for “House of Cards.”

He earns an annual salary of $4 million.

He has an estimated net worth of $40million.