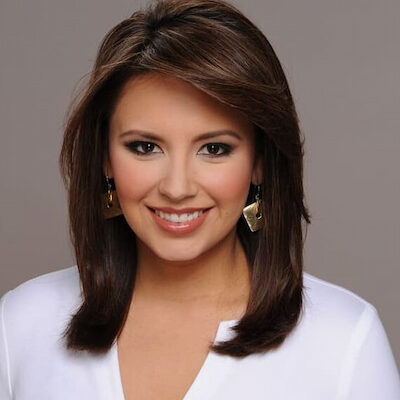 Daniella Guzman is an American Emmy award-winning journalist for NBC4s early morning newscast “Today in LA,” airing weekdays from 4 to 7 a.m. She is recognized for her dynamic reporting and genuine warmth that comes across on the air to assist viewers to start their day.

Guzman attended the University of St. Thomas in Houston, where she graduated with honors with a B.A. in bilingual journalism and communications. In addition, being a Texas native she is also fluent in Spanish.

Guzman has revealed information about her grandparents posting a photo of her grandfather and her grandmother. Any other information concerning her parents and relatives is not known yet.

Guzman is happily married to Hector Gonzalez since 2005 living in Los Angeles California. The couple is blessed with two daughters namely Sofia Villegas and her youngest Olivia.

Guzman is an American journalist for NBC4’s early morning newscast “Today in LA,” airing weekdays from 4 to 7 a.m. She joined the station in 2012 after a successful career at NBC5Chicago where she worked as an anchor for the weekday morning newscast.

Before joining NBC4, She served for Telemundo station KTMD in Houston Texas until 2004. Secondly after working for KTMD Guzman joined the NBC affiliate KPRC-TV for Chicago as a general assignment reporter. She came to NBC5 after working for KPRC-TV. While at NBC5 she covered issues important to local residents and a fast-moving blend of the latest breaking news stories.

During her tenure at NBC4, she broadcasted live for “Today in LA” from the 2016 Olympic Games in Rio de Janeiro, Brazil. Providing viewers with all-access coverage of the games, including the gold medal win for the U.S. Final Five gymnastics team and delivering local news. She as well brought viewers closer to the culture of Rio, showcasing iconic sites including the Selaron Steps and Christ the Redeemer.

Working for the community is a way of life for her. At a young age, she volunteered her time to assist others. Guzman supports many causes throughout the Southland and remains active in the community. As a result, she has been recognized for the work she has done. Most importantly the Excellence in Broadcast Journalism award by the National Hispanic Media Coalition.