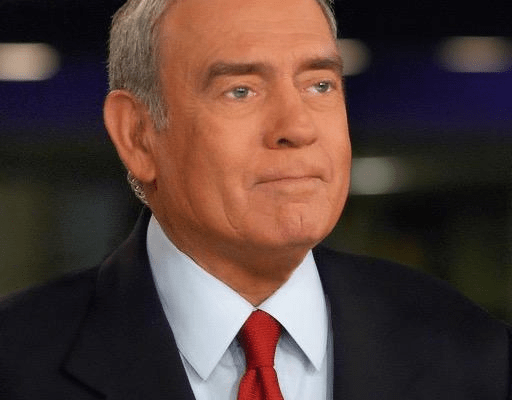 Dan Rather is an American journalist and author who covered some of the most important historical events of his time, including the civil rights movement, the Vietnam War, and the Watergate scandal, during his four decades with CBS.

In 1953, he earned a bachelor’s degree in journalism from Sam Houston State Teachers College in Huntsville, where he was editor of the school newspaper, The Houstonian. He was also a member of the Caballeros, the founding organization of the Epsilon Psi chapter of the Sigma Chi fraternity. While in college, Rather worked for KSAM-FM radio in Huntsville, calling junior high, high school, and Sam Houston State football games. After obtaining his undergraduate degree, Rather briefly attended South Texas College of Law in Houston.

He is the son of Daniel Irvin Rather Sr., a ditch digger and pipe layer, and the former Byrl Veda Page, a waitress and seamstress. Neither of his parents went to college but they still instilled the value of hard work into Rather.

He has two younger siblings; Donald Eugene Rather and Patricia Rather

Rather married Jean Goebel in 1957. The couple maintain homes in New York City and Austin, Texas.

Dan and his wife have a son and a daughter. Their daughter Robin is an environmentalist and community activist in Austin, Texas. Their son Danjack is an assistant district attorney in the District Attorney’s office in Manhattan, New York.

On February 28, 1962, Rather began a six-month trial initiation at CBS. His first reports for CBS included coverage of the crash of American Airlines Flight 1 in Jamaica Bay, and a report on the suffocation of children at a hospital in Binghamton, New York. Shortly after, he was made chief of CBS’s Southwest bureau in Dallas. In August 1963, he was appointed chief of the Southern bureau in New Orleans, responsible for coverage of news events in the South, Southwest, Mexico and Central America.

Rather’s reporting during the national mourning period following the Kennedy assassination and subsequent events impressed CBS News management. In 1964, they selected him for the network’s White House correspondent position.

After President Nixon’s resignation in 1974, Rather became chief correspondent for the documentary series CBS Reports. In December 1975, he became a correspondent of the long-running Sunday night news show 60 Minutes—at the time the program was moved from a Sunday afternoon time-slot to primetime.

He succeeded to the news anchor position after Cronkite’s retirement, making his first broadcast on March 9, 1981. Rather also held other positions during his time as anchor. In January 1988, he became host of the newly created 48 Hours, and in January 1999, Rather joined the new 60 Minutes II as a correspondent.

For a short time from 1993 to 1995, Rather co-anchored the evening news with Connie Chung. After Chung left the network, Rather went back to doing the newscast alone. He was completely ousted when his contract ended due to poor performance.

Rather retired as the anchorman and Managing Editor of the CBS Evening News in 2005; his last broadcast was Wednesday, March 9, 2005. He had worked as the anchorman for 24 full years, the longest tenure of anyone in American television history, and for a short time, continued to work as a correspondent for 60 Minutes.

On June 20, 2006, CBS News and Sports President Sean McManus announced that Rather would leave the network after 44 years.

Dan Rather The Wall Within

On June 2, 1988, Rather hosted a CBS News special, The Wall Within. In it, he interviewed six veterans, each of whom said he had witnessed horrible acts in Vietnam. Two of the men said that they had killed civilians, and two others said that they had seen friends die. Each talked about the effects the war had upon their lives including depression, unemployment, drug use, and homelessness.

In 2004, National Review ran an article by Anne Morse entitled “The First Rathergate.” She said that almost nothing claimed by participants in The Wall Within was true. Citing the self-published book Stolen Valor (1998) by veteran B. G. Burkett, and investigative journalist Glenna Whitley, Morse said that military records revealed that the six former servicemen had lied about their experiences. Only one served in combat, and two had never been in Vietnam.

Dan Rather Lawsuit over ouster from CBS Network

On September 19, 2007, Rather filed a $70 million lawsuit against CBS, its former parent company Viacom; CBS President and CEO Leslie Moonves; Sumner Redstone, chairman of both Viacom and CBS; and Andrew Heyward, former president of CBS News.

He accused the network and its ownership and management of making him a “scapegoat” in the Killian story. Rather’s lawyers claimed that Bush’s military service would be proven to be a sham, and Rather would be vindicated.

On May 18, 2012, Rather appeared on Real Time With Bill Maher, and claimed he had been fired for reporting a story about George W. Bush’s year of absence from the reserve unit he served with, and that the news corporations had been “very uncomfortable” with running the story.

Following his departure from CBS, he joined Mark Cuban’s cable network AXS TV (then called HDNet) to host and produce the weekly one-hour news show Dan Rather Reports from 2006 until 2013.

He also appears frequently on a number of news shows, including MSNBC’s The Rachel Maddow Show and The Last Word with Lawrence O’Donnell and on CNN. He has also written for The Huffington Post.

In 2015, Rather launched an independent production company called News and Guts Media, through which he produces The Big Interview among other projects.

Rather has written a number of books :

Dan Rather Net Worth