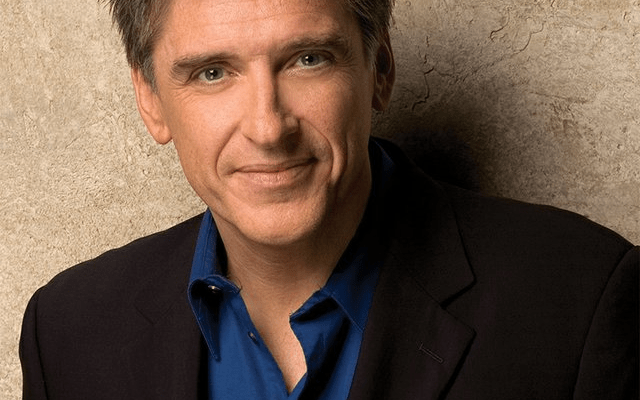 Ferguson attended Muirfield Primary School and Cumbernauld High School. At age 16, he left high school and began an apprenticeship to be an electronics technician at a local factory of American company Burroughs Corporation.

His parents are, Robert Ferguson, a postal worker and Janet.

Ferguson eulogized his father Robert on an episode of The Late Late Show in January 2006. Following the death of his mother Janet (3 August 1933 – 1 December 2008), he spoke of her on-air, ending the Programme by playing her favorite song: “Rivers of Babylon” by Boney M.

Craig has three siblings; two sisters, Janice and Lynn, and a brother, Scott. His younger sister, Lynn, followed his footsteps in the show business. She worked with Craig on The Late Late Show as a writer until July 2011.

But Lynn admits it was weird at first working for her big brother. She explained: “The first couple of days I was like ‘I can’t believe my big brother has his own TV show’.

“Craig and I have always been very practical with one another. We’re family, but we can talk professionally about things too. That’s because we’re very close. “The truth is we forgot we were siblings really, really quickly, because you are writing five shows a week every week.

Ferguson has married three times and divorced twice. His first marriage was to Anne Hogarth from 1983 to 1986, during which time they lived in New York. His second marriage was to Sascha Corwin, founder and proprietor of Los Angeles’ SpySchool. He and Corwin shared custody of their son, and live near each other in the Hollywood Hills. On December 31, 2008, Ferguson married art dealer Megan Wallace-Cunningham in a private ceremony on her family’s farm in Chester, Vermont.

In December 2004, Ferguson succeeded Craig Kilborn on CBS’s The Late Late Show. His first show as the regular host aired on 3 January 2005. The show was unique in that it had no “human” sidekicks.

The Late Late Show averaged 2.0 million viewers in its 2007 season, compared with 2.5 million for Late Night with Conan O’Brien. In April 2008, The Late Late Show with Craig Ferguson beat Late Night with Conan O’Brien for weekly ratings 1.88 million to 1.77 million for the first time since the two shows went head-to-head with their respective hosts.

On 28 April 2014, Ferguson announced he would be leaving The Late Late Show at the end of 2014, with the final episode airing on 19 December. His contract was set to expire in June 2014, but a six-month extension was agreed on to provide a more graceful exit and give CBS more time to find a replacement host. He reportedly received US$5 million as part of his contract because he was not selected as the replacement for David Letterman’s Late Show. He made the decision prior to Letterman’s announcement but agreed to delay making his own decision public until the reaction to Letterman’s decision had died down. CBS continued the franchise with James Corden as the new host.

On 27 February 2017, he launched The Craig Ferguson Show, a two-hour talk radio show on the Comedy Greats channel and Faction Talk on SiriusXM Satellite Radio. His last new show aired 11 May 2018.

Craig has made guest appearances on The Tonight Show with Jay Leno, Late Show with David Letterman, Late Night with Conan O’Brien, Rachael Ray, Countdown with Keith Olbermann, The Howard Stern Show, The Daily Show, The View, Loveline, Real Time with Bill Maher, The Soup, The Talk, The Price Is Right, Kevin Pollak’s Chat Show, The Dennis Miller Show and The Late Show with Stephen Colbert. He also co-hosted Live with Regis & Kelly with Kelly Ripa and was guest host on the April Fools’ Day episode of The Price Is Right in 2014.

In 2009, he made a cameo live-action appearance in the episode “We Love You, Conrad” on Family Guy.

He has done voice work in cartoons, including being the voice of Barry’s evil alter-ego in the “With Friends Like Steve’s” episode of American Dad!; in Freakazoid! as Roddy MacStew, Freakazoid’s mentor; and on Buzz Lightyear of Star Command as the robot vampire NOS-4-A2. He was the voice of Susan the boil on Futurama, which was a parody of Scottish singer Susan Boyle. In October 2008 Ferguson taped his stand up show in Boston for a Comedy Central special entitled A Wee Bit o’ Revolution, which aired on 22 March 2009.

On 6 November 2009, he appeared as himself in a SpongeBob SquarePants special titled SpongeBob’s Truth or Square. He hosted Discovery Channel’s 23rd season of Shark Week in 2010. Ferguson briefly appeared in Toby Keith’s “Red Solo Cup” music video released on 10 October 2011.

In September 2013, Ferguson guest-starred on the season finale of Hot in Cleveland as a priest/tabloid journalist who turns out to be the father of Joy’s (Jane Leeves) son. Ferguson reprised the role for several episodes when the show returned in March 2014.

Ferguson hosted the syndicated game show Celebrity Name Game, produced by Coquette Productions, beginning in late 2014. His involvement in the project dates back to 2011, when it was originally pitched and piloted as a CBS primetime series. As of April 2014, the series had an initial order of 180 episodes. The syndicated series began airing on 22 September 2014. Ferguson won Daytime Emmy Awards for Outstanding Game Show Host for Celebrity Name Game in 2015 and 2016. On 2 December 2016, it was announced that the series would end after three seasons.

Ferguson signed in 2015 to play Prentiss Porter in The King of 7B, a comedy pilot for ABC. However, the show was not picked up.

Ferguson is an accomplished writer and he has published three books: Between the Bridge and the River in 2006, American on Purpose: The Improbable Adventures of an Unlikely Patriot in 2009 and finally Riding the Elephant: A Memoir of Altercations, Humiliations, Hallucinations, and Observations in 2019.

His first book, Between the Bridge and the River, is a novel, telling an interconnected tale of two childhood friends from Scotland and two Southern illegitimate half-brothers – with a cameo by Tony Randall. The second, American on Purpose, is a memoir of his life and career through his swearing in as a U.S. citizen.

He also contributed to a short story for the anthology, In Sunlight or in Shadow (2017), edited by Lawrence Block.

A post shared by The Craig Ferguson Show (@craigyferg)