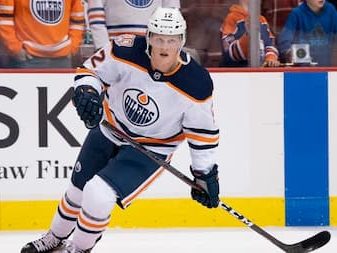 Colby Cave was a Canadian professional ice hockey player, playing for the Bakersfield Condors of the American Hockey League (AHL), as a prospect for the Edmonton Oilers of the National Hockey League (NHL). He died in April 11, 2020 at the age of 25 after suffering a brain bleed due to a colloid cyst.

Colby was 25 years old at the time of his death;

I remember bringing Colb to his first Hillsong service. I remember the exact service that Josh prayed for him after Carl spoke. A few days ago, he told me that going to Hillsong has completely changed his life. This photo screams proud and grateful and might just be my new favourite photo of us. Proud of my husband and the man he has become. Grateful for answered prayers and our Hillsong crew, who has loved, supported, and rallied around us through all the changes. This hectic month, I’m constantly reminding my heart to be full, thankful, and that we our Graced for this ??? Good Grace – Hillsong UNITED ?? PSA: We miss you so much Hillsong crew, y’all know you are!! ??

Colby began his career as an ice hockey player with the Battlefords Stars in the Saskatchewan Midget AAA Hockey League from 2009 to 2011. During the 2009 WHL Bantam Draft he was drafted to the major junior level with the 13th selection by the Kootenay Ice. However, his rights were later traded on January 9, 2011 by Kootenay to the Swift Current Broncos. During his third full season with the Broncos he was named team captain.

On April 4, 2015 he was signed as an undrafted free agent to a three-year, entry level contract by the Boston Bruins. This was after he was passed over after being listed 157th overall by ISS Hockey during the 2014 NHL Entry Draft.

On April 6, 2020 was admitted at a hospital in Barrie, Ont. On April 7, he was airlifted to Sunnybrook Hospital in Toronto where he underwent emergency surgery to remove a colloid cyst that was causing pressure on his brain.

On April 8, Emily posted an emotional update on her Instagram saying they needed a miracle. She also revealed that they were not allowed to see Colby due to COVID-19.

‘We need a miracle. Colby´s parents and myself, got to see him through a window and talk to him with a walkie talkie last night. We are no longer allowed to be in the hospital because Covid-19 rules. We have no idea when we will be allowed to see him again. The nurse has tied his wedding band to his ankle. I am dreaming of being able to touch you, hear your voice, squeeze your hand (3 times), and kiss you again. I love you so much, and my heart is shattered into a million pieces without my best friend.’

Please wake up. Please wake up. It’s all I can keep asking, “he’s going to wake up right?” We need a miracle. Colby’s parents and myself, got to see him through a window and talk to him with a walkie talkie last night. We are no longer allowed to be in the hospital because Covid-19 rules. We have no idea when we will be allowed to see him again. The nurse has tied his wedding band to his ankle. I am dreaming of being able to touch you, hear your voice, squeeze your hand (3 times), and kiss you again. I love you so much, and my heart is shattered into a million pieces without my best friend ?✨ Out of difficulties grows miracles- 1 Peter 5:10

What Happened to Colby Cave

Cave suffered a brain bleed due to a colloid cyst.

Colby died on April 11, 2020 his death was announced by Emily who released a statement which read;

“From the family of Colby Cave. It is with great sadness to share the news that our Colby Cave passed away early this morning. I (Emily) and both our families are in shock but know our Colby was loved dearly by us, his family and friends, the entire hockey community, and many more. We thank everyone for their prayers during this difficult time.”

Emily also posted a tribute on her Instagram page she wrote that she never dreamt of being a widow before their first anniversary. She ended the post with ‘AGAPE.’

To my best friend & love of my life, Colby ? My heart is shattered. The amount of physical, mental, and emotional pain I am in when I think about never seeing, touching, or holding you again is unbearable. You are and will always be my person, my hero, the greatest thing to happen to me. I never dreamed of being a widow before our first wedding anniversary. Although, every cell in my body is lost without you, I promise to continue to make you proud. You were the best friend, husband, doggy daddy, and oh how I wished to see you as a baby daddy. I’ll see you again soon, Colb. You’ll be in heaven meeting me with a warm wet kiss. You’ll be with me every step of the way. I don’t want to stop writing just like I didn’t want to stop holding you this morning at the hospital. You are my everything. You always will be. Thank you for now being the best Guardian Angel. Just as you ended your vows, I am going to end with one word, AGAPE. ✨

“The National Hockey League family mourns the heartbreaking passing of Colby Cave, whose life and hockey career, though too short, were inspiringly emblematic of the best of our game. Undrafted but undaunted, Colby was relentless in the pursuit of his hockey dream with both the Edmonton Oilers and Boston Bruins organizations. An earnest and hardworking player, he was admired by his teammates and coaches. More important, he was a warm and generous person who was well-liked by all those fortunate enough to know him.

We send our heartfelt condolences to his wife Emily, their families and Colby’s countless friends throughout the hockey world.”