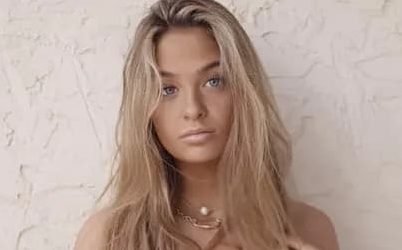 Claudia Conway is the daughter of Kellyanne Conway and George Conway. Her mother Kellyanne is President Trump’s legal advisor. She has been posting anti-Trump messages on her TikTok account.

Kellyanne is an American pollster and political consultant serving as President Trump’s legal advisor. She previously served as Trump’s campaign manager becoming the first woman to have run a successful U.S. presidential campaign.

Claudia has a TikTok account where she goes by the moniker, ShortFakeBlonde. She uses her TikTok account to post her liberal views despite her mother being the legal counselor of President Donald Trump.

In one of her videos she said; “Why do people hate on Trump supporters, like can’t we just respect everyone’s opinions? SIKE nah block me pls and then educate yourself.”

In another she wrote; “hi so if you’re leftist, acab, anti-trump, blm, etc. please interact w this because most of my comments are threats from angry trump supporters,”

She was asked by one of her followers if she “the same political views” as her mom, she responded “no ❤️❤️”

In another video she said; “Believe it or not you can have your own opinions simply by educating yourself.”

In another video she thanked her followers “all the love on her videos,” but pleaded for those commenting not to bash her parents. “Just please no hate to my mom or my dad, they’re both amazing people … and I love them so much.”