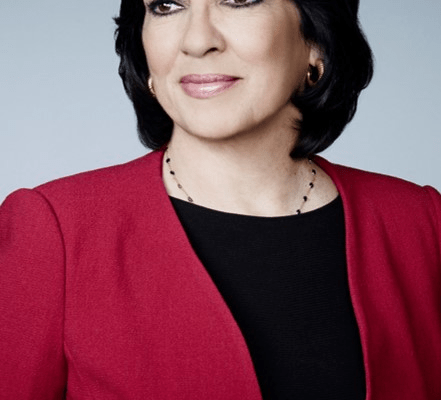 Christiane Amanpour is a British-Iranian journalist and television host. She was one of the leading war reporters of the late 20th and early 21st centuries. Amanpour is the Chief International Anchor for CNN and host of CNN International’s nightly interview program Amanpour. She is also the host of Amanpour & Company on PBS.

Amanpour was born on January 12, 1958 in Ealing, Middlesex, England.

Amanpour is the daughter of Mohammad Taghi and Patricia Anne Amanpour. Her father was Persian, from Tehran and a Muslim while her mother was Catholic.

Amanpour was married to American James Rubin from 1998 to 2018. James Rubin is a former US Assistant Secretary of State and spokesman for the US State Department during the Clinton administration and an informal adviser to former US Secretary of State Hillary Clinton and to former President Barack Obama.
It was announced in July 2018 that Amanpour and Rubin were divorcing.

Amanpour has a son Darius John Rubin who was born in 2000.

Amanpour is CNN’s chief international anchor of the program “Amanpour,” which also airs on PBS in the United States. She is based in the network’s London bureau. She began in 1983 as an entry-level assistant on the international assignment desk at CNN’s headquarters in Atlanta.

Amanpour reported 1991 Gulf War, Saddam Hussein trial, the brutality of the Bosnian War among others. From 1992 to 2010, Amanpour was CNN’s chief international correspondent as well as the anchor of Amanpour.

From 1996 to 2005, she was contracted by 60 Minutes creator Don Hewitt to file four to five in-depth international news reports a year as a special contributor. Hewitt’s successor Jeff Fager terminated her contract.

Amanpour left CNN for ABC News, where she would anchor ‘This Week’ on 18 March 2010.
On 13 December 2011, ABC announced Amanpour would be leaving her post as anchor of ABC News’ This Week on 8 January 2012, and returning to CNN International, where she had previously worked, and maintaining a reporting role at ABC News.
In May 2018, Amanpour permanently replaced Charlie Rose on PBS after he left due to allegations of sexual misconduct.

She has received nine honorary degrees, has been named a CBE and was inducted into the Cable Hall of Fame. She is an honorary citizen of Sarajevo and a UNESCO Goodwill Ambassador for Freedom of the Press and the Safety of Journalists.

Her salary from CNN is $5million dollars annually.

Amanpour’s net worth is $16million dollars.