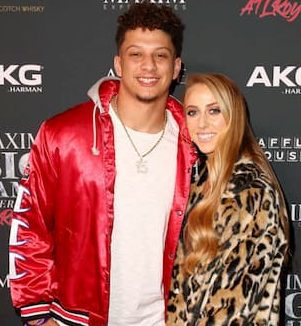 Brittany Matthews is a former soccer player and a certified personal trainer with a bachelor’s degree in kinesiology. She is the fiance of Kansas City Chiefs quarterback, Patrick Mahomes.

Brittany stands at a height of 5 feet 9 inches tall.

Brittany is the daughter of Martin Scott Matthews and Diana Massey. She has a brother named Devin.

Brittany’s stepfather, Paul Massey died on November 11, 2018 while attending a Chiefs-Cardinals game. He was the general manager at DCD Warehouse in Tyler, Texas for more than 35 years. He was a soccer coach for more than 20 years. Paul collapsed outside Arrowhead Stadium in pregame. Paramedics were quick to arrive.

Brittany posted on her Instagram page announcing that her stepfather died after collapsing.

Today is a day I will never forget! Directly after this picture I sprinted to the front entrance to see my step dad passed out! He did not come back from this and he was called to heaven today! I KNOW 100% he is so happy up there with his kids looking down on us cheering loud that his chiefs won today! Thank you everyone for the prayers and sweet text! We will miss you Paul So So So Much! I will take care of mom for you!❤️??

Brittany played soccer at the University of Texas campus in Tyler. She played 5-5 forward, completing a stellar four-year career with the Patriots with 31 goals, 16 assists and helped the team to a 56-13-5 record. She earned all-region honors after her senior season and is second all-time in program history with 78 points and her 31 goals.

She said she didn’t even plan on playing soccer but ended joining UT Tyler to play soccer as it was close to her home and she knew a few girls that played there.

“I didn’t even see myself playing college soccer when I graduated high school. However, I ended up coming to UT Tyler to play soccer because it was close to home and I knew a few girls that played here that loved it and told me I need to join the family. So I did, and these last four years have made me fall in love with soccer all over again and want to go on and play professional soccer.”

After graduating she signed a professional soccer contract with Iceland pro team of UMF Afturelding/Fram. She later quit soccer and moved to Kansas City.

Brittany is a certified personal trainer with a bachelor’s degree in kinesiology. She sells workout programs on her website, Brittany Lynne Fitness.

The website bio reads; “Brittany Lynne Fitness was created out of my love for fitness and how it makes me feel. My programs are guided workouts that can be completed by anyone. They include options for working out at home or in the gym, allowing you to choose where you feel comfortable and how to best accomplish the goals you set for yourself.”

Brittany is a certified personal trainer with a degree in kinesiology.

Brittany is in a relationship with Patrick Mahomes. The couple met in high school, Whitehouse High School where they both attended. They even attended prom together.

Mahomes is the Kansas City Chiefs quarterback who signed to the NFL in 2017 after he was the first-round draft pick for the Midwestern team. In 2018 he became the starting quarterback for the Chiefs before going on to become the league’s MVP that season.

9.1.2020❤️ On a day that was meant to celebrate you, you turned it into celebrating us. It’s always us, it’s always you and me. The words you looked into my eyes and said to me at this moment, will NEVER leave my mind! You made this day perfect, you took my entire breath away and I could not have imagined anything better. I love you, forever and always! Cheers to spending our lifetime together and an inseparable bond???

This happened after Mahomes received a jewel-studded ring for leading the Chiefs to their Super Bowl win in February. He received the ring at a ceremony on the field at Arrowhead Stadium.

Find someone that looks at you the way @PatrickMahomes looks at his Super Bowl ring ? pic.twitter.com/0Ew0aMKqtG

Brittany’s net worth is under review but her fiance Patrick Mahomes has an estimated net worth of $10 million.

Happy Birthday to me! Spent majority of the day in the Spa, it was just fabulous! ??‍♀️? Thanks for all the birthday wishes and love from everyone ???