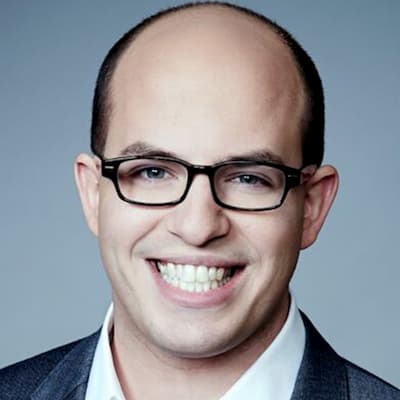 He was born on 3 September 1985 in Damascus, Maryland, United States.

Brian attended Damascus High School, graduating in 2003 before joining Towson University where he graduated with a bachelor’s degree in Mass Communications with a concentration in Journalism.

He is the son of Donna Stelter and Mark  Stelter.  At the age of 15, his father had a heart attack which Brian says he was luckt to survive.

“a heart attack had profoundly changed my dad’s life. He was lucky to have survived it. After he was released from the hospital, he stayed at home for a while, and contemplated whether he could return to his job. He fixed appliances and owned his own one-man company, Appliance Works. He contemplated whether he could return to his fast-food diet, and to his drinking, and to his smoking. I don’t know if he could. But he did.”

On January 27, 2001 he had a heart attack while coaching the basketball team of one of Brian’s younger brothers. He lapsed into a coma and his heart was just too weak. He died on Feb. 10, 2001.

Brian was brought up alongside his two brothers whose information is unavailable.

Stelter is married to Jamie Shupak Stelter since February 22, 2014.  Jamie is an Emmy nominated journalist working as a traffic anchor for NY1, the New York News TV station. She previously wrote a dating column for Complex magazine sharing her experiences dating in the Big Apple. She is also a published novelist, she is the author of ‘Transit Girl’ which is loosely based off her life as she coped with her cheating ex-fiancé, her dream job as a transit reporter, and dating in Manhattan.

Brian and Jamie met on Twitter after Brian began following her tweets regarding a 2010 blizzard. He then DM’d NY1’s lead anchor Pat Kiernan asking if Jamie had a boyfriend.

Brian joined CNN in November 2013 . He  is the anchor of “Reliable Sources,” which examines the week’s top media stories every Sunday at 11:00 a.m. ET on CNN/U.S, and the chief media correspondent for CNN Worldwide and reports for CNN Business, and writes a nightly email newsletter.

Prior to joining CNN, he was a media reporter at The New York Times. Starting in 2007, he covered television and digital media for the Business Day and Arts section of the newspaper. He was also a lead contributor to the “Media Decoder” blog.

In 2020, he executive produced the HBO Documentary, “After Truth: Disinformation and the Cost of Fake News,” directed by Andrew Rossi, who featured Stelter in his 2011 documentary, “Page One: Inside the New York Times.” He was also named to Forbes Magazine’s “30 Under 30: Media” for three consecutive years, and Fortune Magazine’s “40 Under 40: Media & Entertainment.”

In January 2004, while he was a freshman at Towson University in Baltimore, Maryland, Brian created TV Newser, a blog dedicated to coverage of the television news industry. He sold it to Mediabistro.com in July 2004, but continued to edit and write for the blog during the next three years until he graduated . He is on the board of Baltimore Student Media, a nonprofit that publishes Towson’s independent student newspaper, The Towerlight.

According to Fox News, Brian’s show, ‘Reliable Sources’failed to attract one million viewers for 11-straight weeks and averaged only 752,000 on June 13, 2021 for its smallest audience of 2021.

“Stelter, who claims to cover the media industry but often ignores stories that would tarnish the reputation of a fellow liberal, lost five percent of his viewers compared to the previous week. The struggling show has now finished with less than 800,000 viewers on three different occasions in 2021.”

Stelter published the best-selling book, “HOAX: Donald Trump, Fox News, and the Dangerous Distortion of Truth” in fall 2020, which tells the twisted story of the relationship between President Trump and Fox News. Over the course of two years writing the book, Stelter spoke with over 250 current and former Fox insiders in an effort to understand the inner workings of Rupert Murdoch’s multibillion-dollar media empire.

In 2013, he published The New York Times best-selling book, “Top of the Morning: Inside the Cutthroat World of Morning TV”, about the competitive world of morning news shows. He is a consulting producer on Apple’s drama “The Morning Show,” which is inspired by his book.

On June 17, 2021 while having a sit-down with progressive commentator Kyle Kulinski Joe Rogan on his podcast, “The Joe Rogan Experience” blasted Brian. He recalled a panel discussion on CNN’s “Reliable Sources” back in January when a guest sounded the alarm that certain YouTube personalities that have more viewers than CNN.

“They didn’t even understand the way they were describing it. They were describing it as if they’re entitled to viewers. They were saying, ‘There are people on YouTube right now that get more views than this show.’ This is because the market has spoken and your show’s f—in terrible. Well, Brian Stelter’s show keeps slipping and slipping and slipping in the ratings.” Rogan said.

Rogan added that Brian might do well with his own podcast; “They’re obviously being told a certain amount of what to do. And maybe he’d be an interesting guy if he had his own f—in podcast that you can rely on his own personality and be himself. I don’t know. I can’t imagine doing that gig.”