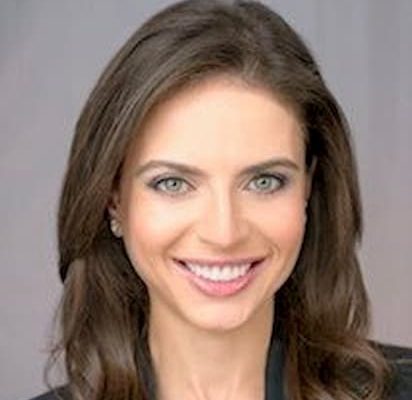 Bianna Vitalievna Golodryga is an American media personality who is currently serving as a senior global affairs analyst at CNN. She was previously the news and finance anchor at Yahoo! News. She was also a  co-anchor of the weekend edition of ABC’s Good Morning America and a co-host of CBS This Morning.

Golodryga attended the High School for the Performing and Visual Arts in Houston and later graduated from the University of Texas at Austin in May 2000, with a degree in Russian/East European & Eurasian studies and a minor in economics.

Golodryga is the only child of the only child of Zhanna Golodryga and Vitaly Golodryga. Her mother is the chief digital and administrative officer for Phillips 66, and previously worked as chief information officer of Hess Corporation  while her father is  a mechanical engineer who  was also  a consultant for DuPont. In 1980, when she was 18 months old, her family left the Soviet Union as political refugees, each with $75. They settled in Houston, Texas, after initially moving to Galveston, Texas.

Bianna is married to Peter R. Orszag a columnist for the Times and  the former Director of the Office of Management and Budget for the Obama Administration and the CEO of Financial Advisory at Lazard.  The duo  met at  a White House Correspondent’s Dinner in May and got engaged in December. The duo later exchanged their marriage vows at Capitale, an event space on the Bowery in New York, in September 2010.

Peter Orsgaz was previously married to Cameron Rachel Hamil and they had  two children. However, due to irreconcilable reasons, the couple decided to divorce and part their ways. The divorce agreement showed that Peter would give a $400,000 fund that would cover any expenses of the children. Later he started dating Claire Milonas, a venture capitalist with whom he welcomed another child, a daughter. However, Peter reportedly left Claire while she was pregnant after he met Bianna.

Bianna  is currently serving as a senior global affairs analyst at CNN. She joined the station in 2019 after leaving CBS News. Prior to working for CNN, Bianna also worked at CNBC in 2001 as  a producer . Here, she produced live coverage following the 9/11 terrorist attacks and conducted countless interviews with top business leaders.

In 2004 she became a segment producer for “The Wall Street Journal Report with Maria Bartiromo,” the nation’s most-watched financial news program. Golodryga also  worked at ABC News for seven years as the weekend co-anchor for Good Morning America and as a network business correspondent. Some of her more high-profile interviews include President Bill Clinton, former Secretary of State Condoleezza Rice, and Warren Buffett.

In 2014, she became a news and finance anchor at Yahoo News, as a news and finance anchor alongside Katie Couric,In 2017, she began reporting for CBS News  alongside King, O’Donnell, and Dickerson on CBS This Morning and filled in on the evening news with Jeff Glor. She joined CBS on a permanent basis as a correspondent in September 2017 and simultaneously joined CNN as a contributor. She also anchored CBS News coverage of the Las Vegas concert shooting and the funeral of First Lady Barbara Bush

Bianna  also appeared on CBSN, the division’s 24/7 digital streaming network. She’s reported live from her hometown of Houston, during the aftermath of Hurricane Harvey. . Bianna  was a guest host on Way Too Early and was a regular contributor to Morning Joe on MSNBC.

Bianna has an estimated net worth of $3 million