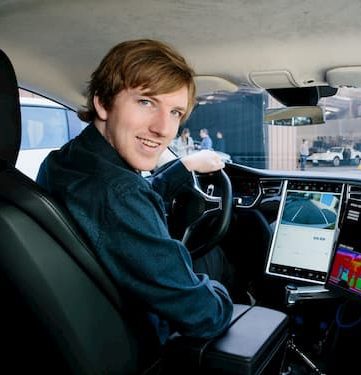 Austin Russell is an engineer, entrepreneur, and LiDAR industry pioneer for autonomous vehicles. He is the founder and CEO of Luminar Technologies. On December 3, 2020 he was named by Forbes as the World’s newest youngest self-made billionaire.

The names of his parents are unknown.

He briefly attended Stanford University where he studied applied physics but he dropped out to focus on Luminar. He told CNBC during an interview that he has no regrets about dropping out as it worked out for him.

“Dropping out is definitely right for some people and can work really well if you’re very clear on what you want to do and how you want to go about doing it. And clear about just life goals in general. A lot of it is just about timing.”

Russell founded Luminar, an autonomous vehicle sensor and software company in 2012. He founded the company at the age of 17 while pursuing research in optical technologies and exploring applications across the medical, augmented reality, robotics, and automotive industries. The business however got its real start after he dropped out of college at the age of 18 and accepted a Thiel Fellowship.

During the fellowship, his work with light went from “theoretical research” to a “real-world business.” The technology Luminar is building, lidar sensors, are the industry standard for autonomous cars. There are working to build lidar sensors, including Velodyne, Quanergy and Innoviz.

Luminar aims to make better quality lidar sensors than the rest of the competition by building all its own components — lasers, receivers, scanning mechanisms and processing electronics. They report that their sensors “see” at 50 times better resolution and have a tenfold range compared with industry competitors.

Russell said during an interview with CNBC that he started writing software at the age of 10 or 11. He revealed that he once programmed the firmware in his Nintendo DS to turn it into a cellphone because his parents wouldn’t buy him one.

His interests eventually evolved and got more sophisticated.“Eventually [I] ended up evolving into building computing systems, supercomputers, other things on hardware, and then ultimately evolving into lasers, optics and photonics — those kind of things.”

At the age of 14 or 15, he started working with lidar (light detection and ranging).

Austin is a Thiel Fellow. He briefly attended Stanford University where he studied applied physics but he dropped out to focus on Luminar. He applied for and was awarded the famous Thiel Fellowship. PayPal co-founder and early Facebook investor Peter Thiel pays students $100,000 to ditch college and work on their start-ups for two years.

Thiel has been his mentor and advisor and has said he is impressed by not just his intellect but also his ability to hold on to a significant chunk of Luminar as it moved from Russell’s garage concept to Nasdaq.

“You can build a billion-dollar business but that does not mean you can become a billionaire. It’s remarkable from a financing perspective to retain a financial stake of that size.”

On December 23, 2020, Forbes named him the world’s newest and youngest self-made billionaire. Forbes said that his 104.7 million shares, about a third of Luminar’s outstanding equity, was worth $2.4 billion at the close of Nasdaq trading on December 3, 2020.

He has an estimated net worth of $2.4 billion.