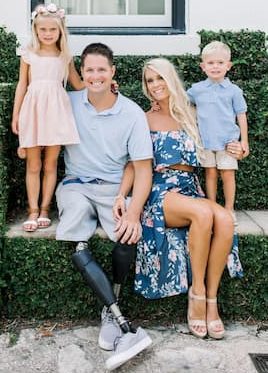 Ashley Kolfage is an American Instagram model and influencer.  She is the wife of Brian Kolfage, a triple amputee and Purple Heart veteran who lost an arm and two legs in Iraq, 2004. Brian was arrested on August 20, 2020 in Florida over accusations he siphoned funds from the $27 million raised by his ‘We Build The Wall’ campaign.

Ashley is married to Brian Kolfage, the couple got married on May 28, 2011. In 2014, Brian was presented the George C. Lang Award for Courage for his many efforts to take care of and mentor wounded vets.

Brian and Ashley met when Asley was working as a hostess at a Chili’s in the small west Texas city of San Angelo. The two became friends quickly but Brian was later deployed to Iraq where on September 11, 2004 he became the most severely wounded airman to survive any war in U.S. history after a 107mm enemy rocket landed just three feet away as he walked to get a drink of water. Brian both legs were instantly shredded, he lost his dominant right hand and his lung collapsed.

After leaving the hospital Brian messaged Ashley on Facebook and the two soon hit it off once again.

On August 20, 2020 Brian was arrested and charged with skimming $350,000 in donations for the US-Mexico border wall blew the cash on his “lavish lifestyle,” including a boat, jewelry and cosmetic surgery. He is accused of pocketing $20,000 a month — and a $100,000 up-front payment — from the viral GoFundMe fundraiser “We Build the Wall,” which launched in 2018 and raised $25 million.

Ashley together with her husband have two children together; a son and a daughter.

I am not sure who is more excited for school to start!!?? The kids or me ?? jk I thought I would be excited but tbh I’m going to really miss our pool, beach & boat days together. Best thing that came from the never ending summer was spending endless time with my babies. . . . . . . . . #firstdayofschool #school #mom #momlife #momsofinstagram #kids #potterybarnteen #potterybarnkids #smile #behappy #positive #family

Ashley works as a model and social media influencer for multiple brands such as the energy drink ‘Bang’. In 2018 she competed to be on the cover of Maxim as part of a donation campaign for Homes for Wounded Warriors Foundation. At the time she told The Military Times about her campaign, “My goal is to raise the most money. I would love to win [the cover], but when I found out that [Maxim] was raising money for wounded warriors, it made me want to do it even more. I love that Maxim supports our heroes.”

It is not clear whether Ashley has done any cosmetic surgery but according to prosecutors Brian is charged with skimming $350,000 in donations for the US-Mexico border wall blew the cash on his “lavish lifestyle,” including a boat, jewelry and cosmetic surgery.