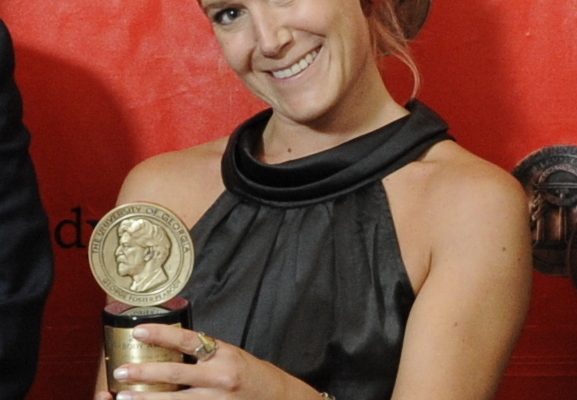 Arwa Damon is an American journalist who is a senior international correspondent for CNN based in Istanbul. She covered the Middle East as a freelance journalist since 2003 before joining CNN in 2006.
Arwa is also the president and founder of a humanitarian organization called INARA that provides medical treatment to refugee children from Syria.

Damon’s parents are Dr. George H. Damon Jr. and Joumana. She was born to an American father and a Syrian mother. Dr. George is a retired headmaster of American Community School at Beirut and former teacher and middle school director at Robert College.
Her mother Joumana is the daughter of Muhsin al-Barazi, an ex-Syrian Prime Minister.

Damon has kept this part of her life out of the limelight.

Damon skipped sixth grade and graduated with honors from Robert College at the age of 16. She later moved to the U.S. to attend Skidmore College in Saratoga Springs, New York. She graduated with honors in 1999 with a double major in French and biology and a minor in international affairs.

Damon is a senior international correspondent based in CNN’s Istanbul bureau. Damon is one of the network’s Middle East specialists, frequently reports from conflict zones across the Middle East and North Africa region, often focusing her work on humanitarian stories.

Latterly she’s focused on the fierce fighting in Iraq between militant Islamist group ISIS and the Iraqi national army and associated paramilitary groups. In 2018 she won a prestigious George Foster Peabody Award for her reporting on the fall of ISIS in Iraq and Syria and three Emmys for her coverage in Iraq and Syria including Outstanding News Special for Return to Mosul.

After Boko Haram kidnapped more than 200 Nigerian girls from a school in Chibok in April 2014, Damon travelled to West Africa including the islands of Lake Chad as the hunt for the Islamist militant group intensified. This enterprise storytelling contributed to CNN’s 2015 Peabody Award, which recognized Damon’s “high-risk field reporting” that made the network’s coverage of this story “comprehensive and indispensable.”

Damon began her career at CNN in the network’s Baghdad bureau. She was based in Iraq from 2003-2010, covering a number of landmark stories from Iraq including the deadly battle for Fallujah, the trial and execution of Saddam Hussein and the country’s first national elections following the toppling of the Ba’ath regime.

Damon won an Investigative Reporters and Editors’ IRE Award for her reporting of the Consulate attack in Benghazi, along with fellow photojournalist Sarmad Qaseera.

Damon was part of the CNN team who won the 2012 Emmy Award for Outstanding Live Coverage of a Current News Story – Long Form (Revolution in Egypt: President Mubarak Steps Down). In 2014, she was awarded the Courage in Journalism Award given by the International Women’s Media Foundation IWMF.

Damon and CNN were sued by two employees of the U.S. Embassy in Baghdad on July 19, 2014. Damon acknowledged the incident and apologized.

Damon’s net worth is $3 million dollars.