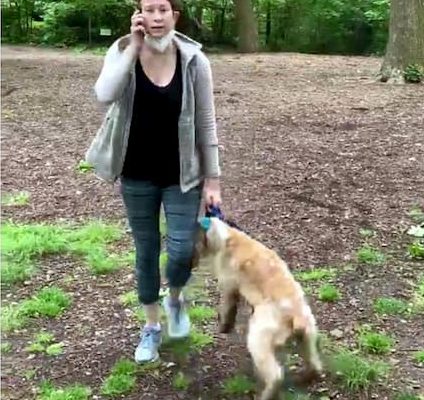 Amy Cooper is the white woman who has been nicknamed Central Park Karen after her video went viral after calling the police on a black man (Christian Cooper) after asking her to obey park rules and keep her dog on a leash. She is the Head of Franklin Templeton Insurance Investment Solutions.

She is a Canadian national although it is not clear if she also holds an American nationality.

She has a Bachelor’s degree in Acturial Science from the University of Waterloo in Ontario. She also holds a master’s in business administration in analytical finance at the University of Chicago Booth School of Business.

On May 25, 2020 Amy was walking her dog while Christian Cooper was bird watching at a wooded area of Central Park called the Ramble. Amy called the police for Christian after he asked her to put the dog on leash, which is the rule according to the park. According to CNN they both said the dispute began because Amy Cooper’s dog was not on a leash.

Christian told CNN that he is an avid bird watcher and was out birding in the Ramble, describing the area as “a major birding hotspot. It’s on the Atlantic flyway.” That’s when he says he saw a dog off its leash.

“That’s important to us birders because we know that dogs won’t be off leash at all and we can go there to see the ground-dwelling birds. People spend a lot of money and time planting in those areas as well. Nothing grows in a dog run for a reason.”

Amy on recounting the incident alleged that Christian was “running in an open field. This man, he was bird watching. He came out of the bush.” She added that he was screaming at her.

Christian however denied it and said he “was actually pretty calm.” He said the dog was “tearing through the plantings,” and he told Amy Cooper the dog needed to be on a leash.

The two went back and forth about the dog leash. According to Christian’s Facebook post the then told Amy, “Look, if you’re going to do what you want, I’m going to do what I want, but you’re not going to like it.”

Christian said he pulled out dog treats. He told CNN he keeps dog treats with him to get dog owners to put their dogs on leashes. Christian Cooper said dog owners, in his experience, hate it when a stranger feeds their dog treats and immediately restrain their dogs afterwards.

Amy claimed he threw the treats at her dog but Christian said he never threw any treats. Christian then began recording the video. The video begins with Amy asking Christian to stop recording while pulling her dog by the collar. Amy called the police and claimed that Christian was threatening her life.

“There’s a man, African American, he has a bicycle helmet. He is recording me and threatening me and my dog. I’m being threatened by a man in the Ramble… Please send the cops immediately!”

Oh, when Karens take a walk with their dogs off leash in the famous Bramble in NY’s Central Park, where it is clearly posted on signs that dogs MUST be leashed at all times, and someone like my brother (an avid birder) politely asks her to put her dog on the leash. pic.twitter.com/3YnzuATsDm

Amy is the Vice President and Insurance Portfolio Specialist at Franklin Templeton Investment Corp. According to her profile, “Amy M. Cooper leads the insurance portfolio management and strategy business at Franklin Templeton. She has dedicated her career to delivering and executing investment solutions for insurance and pension companies globally. … She is a recognized industry leader in insurance accounting and regulatory issues, asset liability management and strategic asset allocation. She has worked in a variety of insurance focused roles.”

The company issued a statement on Monday night on Twitter saying they were investigating the situation as they do not condone racism of any kind.

“We take these matters very seriously, and we do not condone racism of any kind. While we are in the process of investigating the situation, the employee involved has been put on administrative leave.”

In response to an incident involving an employee on May 25th, Franklin Templeton issued the following statement. pic.twitter.com/8f2lMwK0r5

On May 26 Franklin posted on the Twitter account that they have reached a decision to fire Amy.

“Following our internal review of the incident in Central Park yesterday, we have made the decision to terminate the employee involved, effective immediately. We do not tolerate racism of any kind at Franklin Templeton.”

Following our internal review of the incident in Central Park yesterday, we have made the decision to terminate the employee involved, effective immediately. We do not tolerate racism of any kind at Franklin Templeton.

Amy’s dog is a cocker spaniel named Henry, a social media user by the name Stover said she used to walk the dog and Amy was a much better dog owner than she showed on the video.

“If you’re interested, I used to walk this dog for the woman in the video. Her name’s Amy Cooper and the poor pup’s name is Henry. While I can’t speak for her horrendous views, she was typically a much better dog owner than she showed here.”

Amy adopted the dog in March 2018 from Abandoned Angels Cocker Spaniel Rescue, Inc., after the death of her previous cocker spaniel, Ollie. In August 2019 the rescue posted;

“We just can’t get enough of Henry! This very sweet boy captured our hearts the very first day we rescued him. Sadly, he was attacked by another dog on his walk last week. Poor Henry, he miraculously escaped with no major injuries but he was badly traumatized. His mom on the other hand, defending her baby, had to get 10 stitches and a rabies shot. Lesson learned, you don’t have to stop and say hello to other people walking their dog. You never know, even if you’re told the other dog in your path is friendly, anything can happen. Sending healing thoughts and well wishes to Henry and his loving mom, Amy!”

After the video went park video went viral, the rescue organization Abandoned Angels Cocker Spaniel Rescue asked Amy to surrender the dog back. They later released a statement on Facebook saying the dog had been surrendered and is in their care.

“Thank you to the concerned public for reaching out to us about a video involving a dog that was adopted from our rescue a few years ago. As of this evening, the owner has voluntarily surrendered the dog in question to our rescue while this matter is being addressed. Our mission remains the health and safety of our rescued dogs. The dog is now in our rescue’s care and he is safe and in good health. We will not be responding to any further inquiries about the situation, either publicly or privately. Thank you for your understanding.”

During a phone interview with NBC New York Amy apologized. “I sincerely and humbly apologize to everyone, especially to that man, his family. It was unacceptable and I humbly and fully apologize to everyone who’s seen that video, everyone that’s been offended… everyone who thinks of me in a lower light and I understand why they do. When I think about the police, I’m such a blessed person. I’ve come to realize especially today that I think of [the police] as a protection agency, and unfortunately, this has caused me to realize that there are so many people in this country that don’t have that luxury.”

Since the incidence Amy has deleted all her social media accounts including LinkedIn.