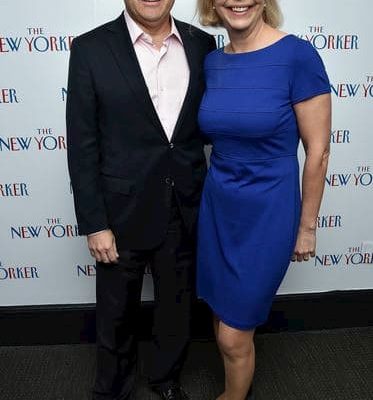 Amy Bennett McIntosh is an American education sector consultant and  the wife of Jeffrey Toobin, an American lawyer, author and legal analyst for CNN and The New Yorker who was suspended by the New Yorker on October 19, 2020 after he exposed his genitalia during a Zoom video call between The New Yorker staff and WNYC radio.

She has a Bachelor’s degree in Economics from Harvard University. She an MBA degree from Harvard Business School.

McIntosh is an education sector consultant whose expertise is in education policy and practice in K-12 and Higher Education. She is also a board member of EAB and PowerSchool Group LLC. She previously seved as an associate vice channelor for academic strategy at City University of New York.

She began her career as a research analyst at Brian & Company and later joined American Express as a senior vice president in marketing (Jan 1984 – Jan 1995). IOn 1995 she joined Verizon where she held various senior management roles (1995 – 2001).

In October 2000 she became the Chief Executive Officer at Zagat Survey. She refocused business strategy on profitable publishing business after dot-com excesses. She later joined Dun and Bradstreet as a senior vice president.

She joined the NYC department of Education in October 2004 as deputy chief of staff at the chancellor’s officer and was later promoted to chief of talent and new initiatives.

In 2010 she became a senior fellow: Regents research fund at the New York State Education Department. In January 2014 she became an assistant secretary at the office of planning, evaluation and policy development at the U.S. Department of Education.

Amy has been married to Toobin since 1986, the couple met at Harvard while they worked at the Harvard Crimson.  Jeffrey is an American lawyer,author and legal analyst for CNN and The New Yorker. He was suspended from The New Yorker on October 19, 2020 after he accidentally exposed himself during a Zoom call with colleagues.

He released a statement apologizing for his mistake, “I made an embarrassingly stupid mistake, believing I was off-camera. I apologize to my wife, family, friends and co-workers, I believed I was not visible on Zoom. I thought no one on the Zoom call could see me. I thought I had muted the Zoom video.”

While Jeffrey was still married to Amy he had an affair with an American lawyer Casey Greenfield which led to the birth of their love child in March 2009.

Amy is a mother of two, a daughter known as Ellen Toobin and a son known as Adam Toobin.