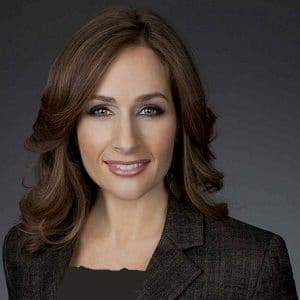 Alison Kosik is an American media personality serving as a CNN business correspondent and anchor. She is based in CNN’s bureau in New York covering the New York Stock Exchange. She also regularly fills in as a co-anchor on CNN’s morning show, “Early Start” and is a fill-in host for CNN International’s daily morning business show.

Alison attended Nova High School before joining American University in Washington, D.C. where she graduated with a B.A. in Broadcast Journalism and Political Science.

She is the daughter of Brenda (née Seinfeld) and Gilbert Kosik. There is no further information concerning them and it’s also not known if she has any siblings.

Kosik is married to Adam Huckett a banker in New York. The couple tied the knot in the year 2008. She was previously married to Pat Bergeson.

Alison and her husband have two children, a daughter, Daisy Mae Hackett and a son Ethan Huckett.

Alison joined CNN in 2007 and works as a Business Correspondent based in CNN’s bureau in New York. For more than a decade, Kosik has been reporting from the floor of the New York Stock Exchange, providing live, daily reports. She also regularly fills in as a co-anchor on CNN’s morning show, “Early Start” and is a fill-in host for CNN International’s daily morning business show.

She has covered the historic moments of the financial crisis, including the international banking crisis with the collapse of investment bank Lehman Brothers, the wave of home foreclosures as the subprime mortgage market collapsed, the dramatic drops in the stock market including the flash crash of 2010 and President Obama’s 2009 Stimulus plan. Kosik walked viewers through historic moves by the Federal Reserve, helping viewers understand complicated topics like quantitative easing and credit default swaps during the economic crisis. She’s also covered some of the biggest initial public offerings since the financial crisis, including Facebook, Twitter and Alibaba and global market moving stories including Brexit and the European debt crisis.

She has also reported breaking news, outside of the business world, for CNN and CNN Newsource, the network’s affiliate services division, covering everything from Hurricane Harvey, to heartbreaking mass shootings to the Westminster Dog Show.

Prior to working for CNN, she also worked as an investigative reporter at WCBS-TV in New York for their Specials Unit and also worked as a reporter/anchor for the Sinclair Broadcast Group in Washington DC and a reporter for Hearst-Argyle Television in Washington, DC. She was also a business correspondent for EnergyNewsLive.com in Washington, DC covering the energy sector, energy policy and the politics of the energy industry from Capitol Hill and  a reporter and fill-in anchor for WPEC-TV/WFLX-TV in West Palm Beach. At KZTV-TV and KRIS-TV in Corpus Christi, Texas , she worked as a reporter/anchor.