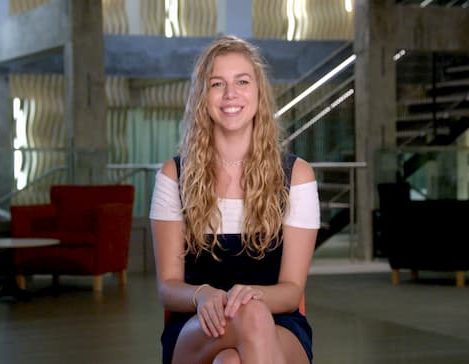 Alexa is the daughter of Jen. She has an older brother known as Cody.

Happy birthday to the mastermind behind this greatness(me). My backbone, the one that would go above and beyond for me, the only woman that can drive me crazy but still love her endlessly. Happy birthday to the most important person in my life and my best friend <3 I love you forever, mama jennybear (she’s a momma bear forreal)

Alexa is a cast member of the Netflix reality series, Deaf U. The series profiles a group of tight-knit students at Gallaudet University, the world’s only liberal arts college for the Deaf.

The show is created by Nyle DiMarco, an actor, model, and advocate for the Deaf community. The show attempts to showcase students from a varied set of backgrounds.

During an interview DiMarco said; “I really want people to understand that people with disabilities are part of the conversation about diversity. Often we’re seen as second-class citizens and there are so many of us, over one billion of us—we’re everywhere.”

THE LONG AWAITED SHOW IS FINALLY OUT!! I’m soooo honored to be a part of something ground breaking. This show is going to make you laugh, cry, feel a little less alone. I hope this show is going to be a reality check for a lot of people. The perception of being deaf is warped, as if we needed to be saved. NO. We eat, sleep & shit the same way as everyone else. So in turn, I hope this show will generate more career opportunities for the deaf, an improved society, especially in terms of accessibility for deaf folxs.

Alexa was in a relationship with Daequan Taylor, he is partially deaf and had hearing abilities until the age of 6. In the first episode of ‘Deaf U,’ it was revealed that Alexa had slept with Daequan.

It was revealed that Alexa had an abortion after she got pregnant after having slept with Daequan. In a conversation with Daequan, Alexa brought up how it seemed as though he got her pregnant on purpose because of a lack of family in his own life. However, he told her that this wasn’t the case. Alexa said she still felt angry about the situation and compared Daequan to her own father, as the two had faced similar challenges in life, and her parent, too, was emotionally distant when she was growing up.

Alexa was in a relationship with Rodney but they have since broken up. During an episode on ‘Deaf U’ the two meet up and the conversation begins with Rodney expressing his hatred towards Alexa. They also spoke about how Alexa slept with Daequan despite the fact that Rodney had asked her not to hook up with his friends. She accepted that she was at fault, and she shouldn’t have lied to him about it either.

Alexa serves as an artistic director at FEEL Magazine, a publication that focuses on highlighting the work of deaf creators. She began working for the magazine as an intern while she was still a student at Gallaudet University.

Summers are for peaches n’ creme??