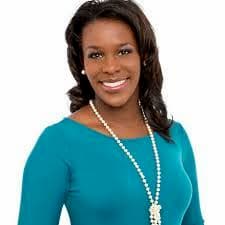 Adrienne Broaddus is an American 3x Emmy-Award winner journalist serving as a CNN correspondent based in Chicago. She previously served as a KARE-TV reporter and 11 a.m. news anchor.

She has not publicly revealed her age.

Broaddus has not revealed the name of her parents but she shares their photos on her social media pages.

My parents married in the middle of a blizzard 42 years ago today. They would’ve celebrated another wedding anniversary with me in Minnesota this week but Mother Nature decided to send a winter storm. Flights canceled. Cheers to the next chapter!

Adrienne is not married but is engaged to Dario Otero, he was selected as a member of the Josie R. Johnson Leadership Academy 2020 Cohort in April 2020.  The couple got engaged on July 24, 2020. She took to her Instagram page to share the news.

I can’t stop smiling. I tell stories everyday but this is the best so far. It takes creativity to leave me surprised. We were on the patio of Handsome Hog in downtown St. Paul. One of a few Black owned restaurants in the Twin Cities with chef Justin Sutherland. I took a sip of my signature drink, a Shirley Temple. But this one had a strong cherry — non grenadine — flavor. I told Dario and he gave me a blank stare as if he didn’t hear a word. Then, I heard a sweet jazz melody and saw a man playing a trumpet while holding a large black speaker. “He sounds amazing,” I thought to myself. “I wonder if he is about to take off his hat and play for donations.” I was wrong. The trumpet player, reppin’ the signature D baseball cap for the Detroit Lions, gave Dario a head nod. Then, Dario stood and my heart sank. My love wears patience like a tailored suit. And all I can do is thank God and Dario’s family for raising the man I never believed could exist. The one who shows me daily, life is a lot like jazz. You gotta improvise. He shines like a star- a sun of the Son. I gain energy simply from the light he shines on me. Thanks to Solomon Parham for the sweet song, “Otero Forever” and shout out to Matthew Wales for capturing the moment. I love you! 7.24.20

Broaddus joined KARE 11 in 2014, where she served as a reporter and 11 a.m. midday anchor she left the station in 2020. During her tenure she major stories for KARE TV and TEGNA stations nationwide, including the shooting death of Michael Brown which led to protests in Ferguson, MO and the deadly flooding in South Carolina. She produced multiple and exclusive stories following the police involved shooting of Philando Castile in Minnesota.

She previously worked as a reporter and fill-in anchor for WISH-TV (CBS) Indianapolis (Aug. 2010 – Dec. 2013). She also served as a reporter and anchor for WNEM (CBS) & WSMH (FOX) Saginaw, MI (Jan. 2007- Aug. 2010). She served as the weekend morning anchor and was later promoted to host of “Better Mid-Michigan,” a nationally syndicated lifestyle and entertainment program.

Adrienne joined CNN in October 2020 as a correspondent based in Chicago.

Dreams. We all have them. Some, I’ve scribbled in my journal. I’ve always written about telling stories at the national level. Now, it is becoming reality. Starting next month, I will be a CNN Correspondent based in Chicago. The first time I walked through the doors of CNN I was with one of my very first mentors, Greg. I was fresh out of undergrad at Michigan State University. Greg snapped this photo of me and CNN’s former anchor, TJ Holmes, on a disposable camera. Monday, tears fell faster than I could wipe them away while watching the send-off from my KARE TV family last night at 6:30 p.m. on Breaking The News. I woke up in Chicago and discovered a flood of wonderful messages. Thank you, everyone. If a girl ever needs needs fuel to keep going, I will fill up on your love and support. Until then .. keep those story ideas flowing. I will be covering the Midwest … and that includes our beloved Minneapolis.

Today marks my first day on air as a CNN Correspondent. We highlighted the explosion of COVID cases in Wisconsin. And, the team I work with is incredible! Bomb lighting and a surprise birthday cake! See ya on air tomorrow – barring any breaking news. ?? #CNN