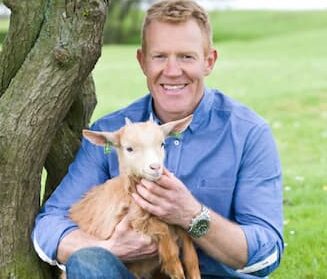 Adam Henson is an English farmer and television presenter. He runs Cotswold Farm Park alongside his business partner Duncan Andrews. He also presents Countryfile on BBC and Our Family Farm Rescue on Channel 5.

He attended local schools through to A’ levels and then worked on the Chatsworth Estate in Derbyshire for a year’s work experience. He later joined Seale-Hayne Agricultural College in Devon where he gained a HND in Agriculture and its Management.

He is the son of Gill (mother) and Joe Henson (father). His father was a farmer and TV presenter. He opened Cotswold Farm Park in 1971 to help protect some of our rare breeds of farm animals. In 1973 he founded the Rare Breeds Survival Trust. In 2011 he received MBE for his services to conservation. He died in October 2015 after being diagnosed with cancer.

On an episode of Our Family Farm Rescue Adam said that he had been asking for his father’s advice and looking for approval until the day he died.

“My dad passed away at 83 and up to the day he died I was asking his advice and looking for his approval. That’s a good thing as long as you’re not looking over your shoulder worrying about what your dad thinks.”

Adam has three sisters and they all helped their father on the Cotswold Farm Park since its opening in 1971. His sister, Rebecca Wilson founded Useful Vision, a charity she founded with her husband Nick Wilson after their late son Ben went blind following brain cancer treatment in 2005.

Adam is in a relationship with Charlotte  Henson. The couple has been together since they were teenagers but have never been married. Adam credits her for convincing him to join Countryfile. During an interview with the Mirror he said,

“Countryfile did a presenter search, and although I wasn’t bothered, my partner nagged me about it, as she thought I’d be really good. After lots of auditions, I ended up getting the job. At first, I was only working once a month, then when it went prime time, the viewing figures went up to six million, and that was that.”

Adam and his wife have two children; a daughter known as Ella and a son known as Alfie.

Henson together with his best friend Duncan Andrews manages Cotswold Farm Park. The two met in college and became friends. After their studies they traveled together to Australia and New Zealand for a year, working on arable and sheep stations, before returning home via California and Canada.

The park was founded by his father in 1971 to help protect some of our rare breeds of farm animals. In 1999 Adam succeeded the farm tenancy from my father. Duncan and his family joined him in the business and now they run ‘the 650-hectare estate, together with the Cotswold Farm Park, home to over 50 breeding flocks and herds of British rare breed farm animals.’

In 2001, Adam joined BBC’s Countryfile as a presenter after they announced they were searching for someone who was interested in farming and the rural domain. The show reports on n rural, agricultural, and environmental issues in the United Kingdom. He has also presented on Countryfile Summer Diaries. He also has a monthly column in Countryfile magazine, as their resident farmer.

He also presented BBC Lambing Live alongside Kate Humble, the third series of which aired in spring 2014. Each series featured a year in the life of a sheep farmer with half of the programme live from the lambing shed based on the farm.

He also presented BBC1’s Secret Britain with Ellie Harrison in 2015. The -part series discovered the Water World of Wales, the Mysterious Moors of Yorkshire and The Hidden Highland of Scotland.

‘Our Family Farm Rescue’ is a four-part series on Channel 5 which sees Adam lend his entrepreneurial expertise to four struggling farming families across the UK, as they risk everything to save their farms with money-making ideas ranging from alpaca trekking to glamping pods.

Adam said he was excited about the show because “Farming isn’t easy — 68% of farmers have had to diversify because they can’t make money out of straight farming and a number of family farms are really struggling across the UK. My dad opened the Cotswold Farm Park, our rare breeds centre, in 1971, and I’ve been brought up with farm diversification and thinking fairly entrepreneurially in terms of improving income streams.

“We’ve got an awful lot going on on our farm, so to have the opportunity to meet some other farmers and advise and guide and encourage them when it comes to diversification was something I was genuinely interested in. It’s been an exciting project!”

In 2013 Adam teamed up with celebrity chef Nigel Slater to co-present Nigel and Adam’s Farm Kitchen, a four-part series exploring how food gets from farm to fork, and how to make the most of seasonal produce.