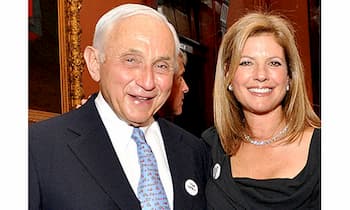 Abigail Koppel is an American lawyer and a philanthropist. She is the wife to billionaire Leslie H. Wexner, the founder and chairman of the Limited Inc.

Abigail got married to Leslie Wexner on January 23, 1993 at their home in New Albany, Ohio. He is an American billionaire businessman, he is the founder and chairman emeritus of L Brands (formerly Limited Brands). The Limited is a clothing retailer with a restricted selection of profitable items, and later expanded his holdings to include Victoria’s Secret, Abercrombie and Fitch, Express, and Bath & Body Works. In February 2020 he sold a majority stake in Victoria’s Secret to Sycamore Partners, and stepped down as CEO of L Brands.

She practiced law from 1987-1992 in London and New York City with the law firm Davis Polk and Wardwell. She left her job to start the Columbus Coalition Against Family Violence.

In 1998 Koppel founded the Columbus Coalition Against Family Violence which later merged with The Center for Child and Family Advocacy at Nationwide Children’s, and they became The Center for Family Safety and Healing.

According to their website; “The Center for Family Safety and Healing fully addresses all aspects of family violence, including child abuse and neglect, teen dating abuse, domestic violence and elder abuse, thanks to an impressive combination of public and private resources.”

She also chaired the board of directors for the Nationwide Children’s Hospital from 2005-2012. During her tenure, Nationwide Children’s completed the largest pediatric expansion in the U.S. history and has been named to U.S. News & World Report’s America’s Best Hospitals list every year since 2006.

Jeffrey Epstein was a hedge-fund manager and a sex offender who was accused and convicted of coercing girls as young as 14 years old into performing sexual acts in exchange for cash. He was convicted and sentenced to 18 months in jail in 2008 but he only served 13 months. On July 8, 2019, he was officially charged with one count of sex trafficking of a minor, and one count of conspiracy to commit sex trafficking. He was later found dead in his prison cell by apparent suicide in August 2019.

In 2007 Jeffrey donated $47 million to Koppel’s charity the YLK charity fund. Jeffrey had been a financial advisor and friend to Koppel’s husband, Les Wexner.

Abigail Wexner has promoted domestic violence/sexual abuse awareness. And yet, a charity fund she created only took 1 donation: $47M from Jeffrey Epstein.
Both she and her husband declined to comment
Questions surround Wexner foundation funded by Epsteinhttps://t.co/KAxym65D3Y

In 2019 Wexner released a statement saying, “I would never have guessed that a person I employed more than a decade ago could have caused such pain to so many people. I have searched my soul… reflected… and regretted that my path ever crossed his.”

In the Netflix docu-series, ‘Jeffrey Epstein: Filthy Rich’ the film revealed that Epstein and Wexner may have met sometime in the 1980s and that, at some point, Wexner had granted Epstein power of attorney over his finances.

According to the docuseries Epstein used Wexner to get access to more young women, since Wexner is the founder of the company that houses the Victoria’s Secret brand.